All About the Four-Stone Engagement Ring

PEOPLE WILL WANT TO TAKE NOT ONE, NOT TWO, NOT THREE, BUT FOUR LOOKS AT YOUR STUNNING FOUR-STONE RING

THE HISTORY OF A FOUR-STONE RING 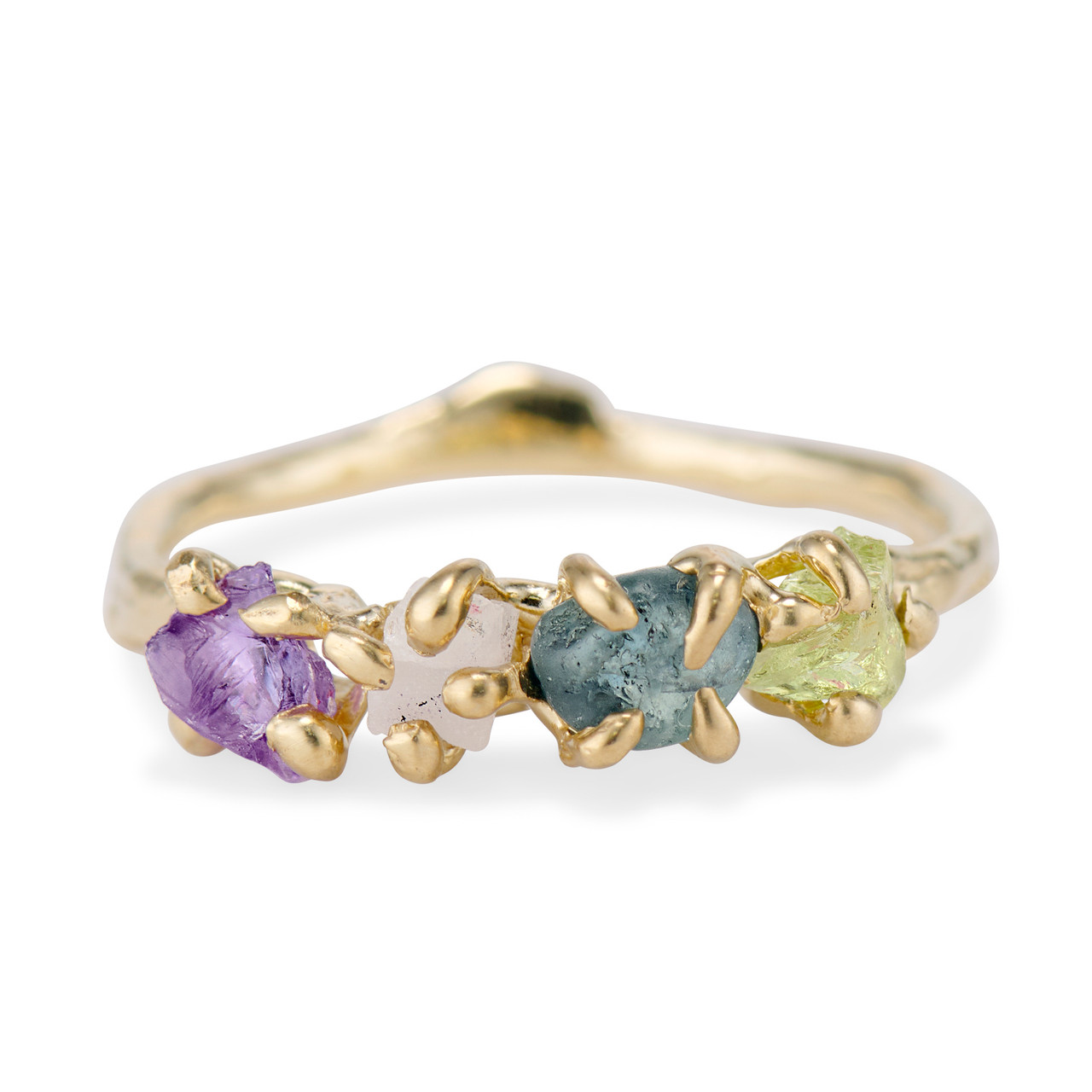 It may seem as if the four-stone diamond ring is a contemporary style, however upon closer inspection, one can see it's been around for quite some time. Four-stone diamond and non-diamond rings were semi-popular during the Georgian era from 1714 to 1830.

Georgian-era four-stone rings were normally half-hooped and bezel set, meaning that the stones are mounted on a bezel or rim of metal that holds them in place. Interestingly, three or five-stone rings were more common than four-stone diamond rings. This is because the odd amount of stones forces the eye to move around the space of the ring creating a strong visual interest in the piece. Nevertheless, 4-stone rings can still be found from the time period and present a stunning contrast to the 3 and 5-stone rings readily available.

Other than the fact that a four-stone engagement ring is a ring that has four stones set in it, there really are no rules regarding what the four-stone engagement ring can look like. It can have any shape or size of diamonds, but the most common is a square or rectangular shape. The center stone can be the largest and most prominent of all the stones or they can all be of equal size. The variety of four-stone diamond and gemstone rings is especially present at Olivia Ewing Jewelry. 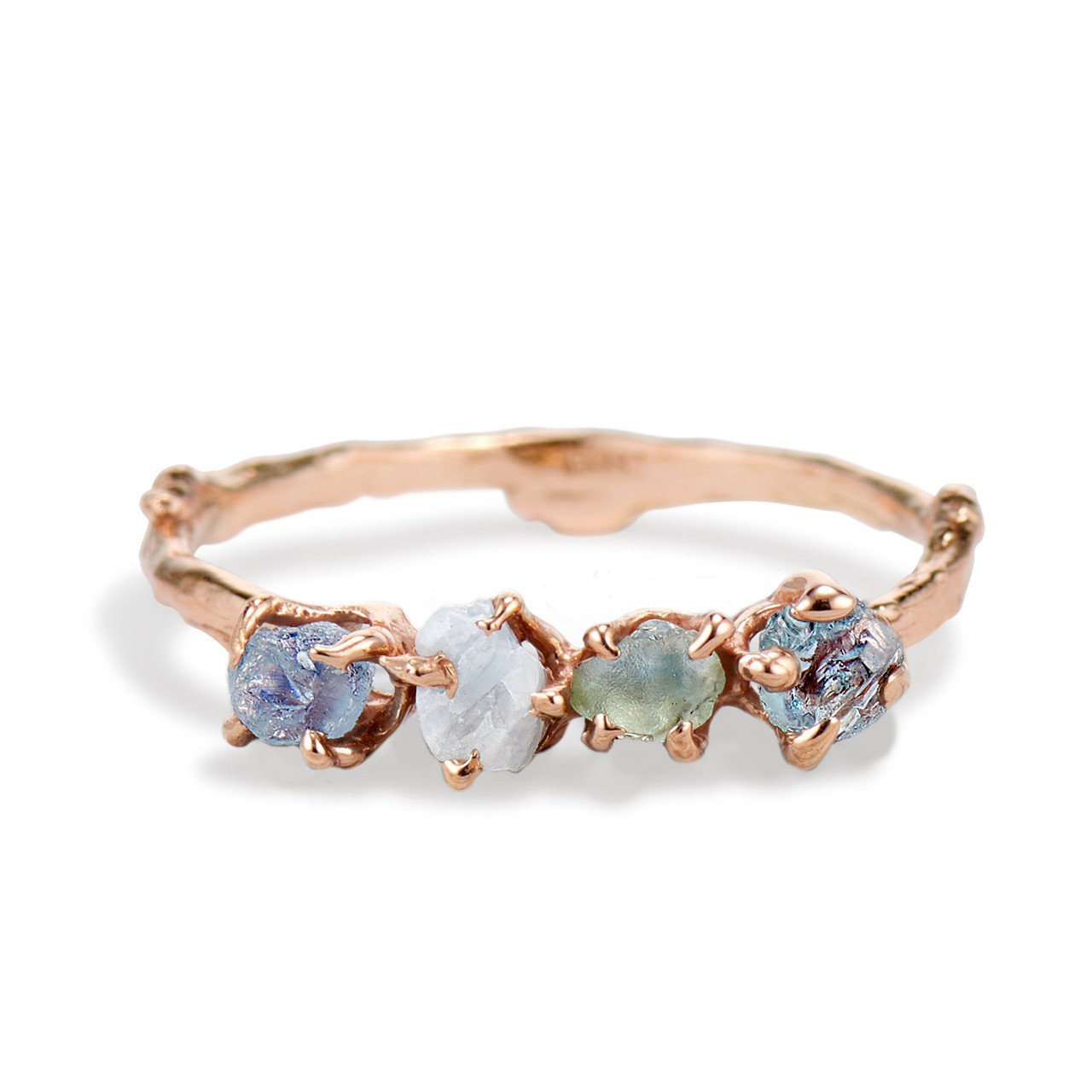 The Garland Montana Sapphire Four-Stone features four round, rough, Montana sapphires in stunning shades of teal and green and a creamy rose gold band to create a uniquely glamourous engagement ring that is perfect for the offbeat bride. 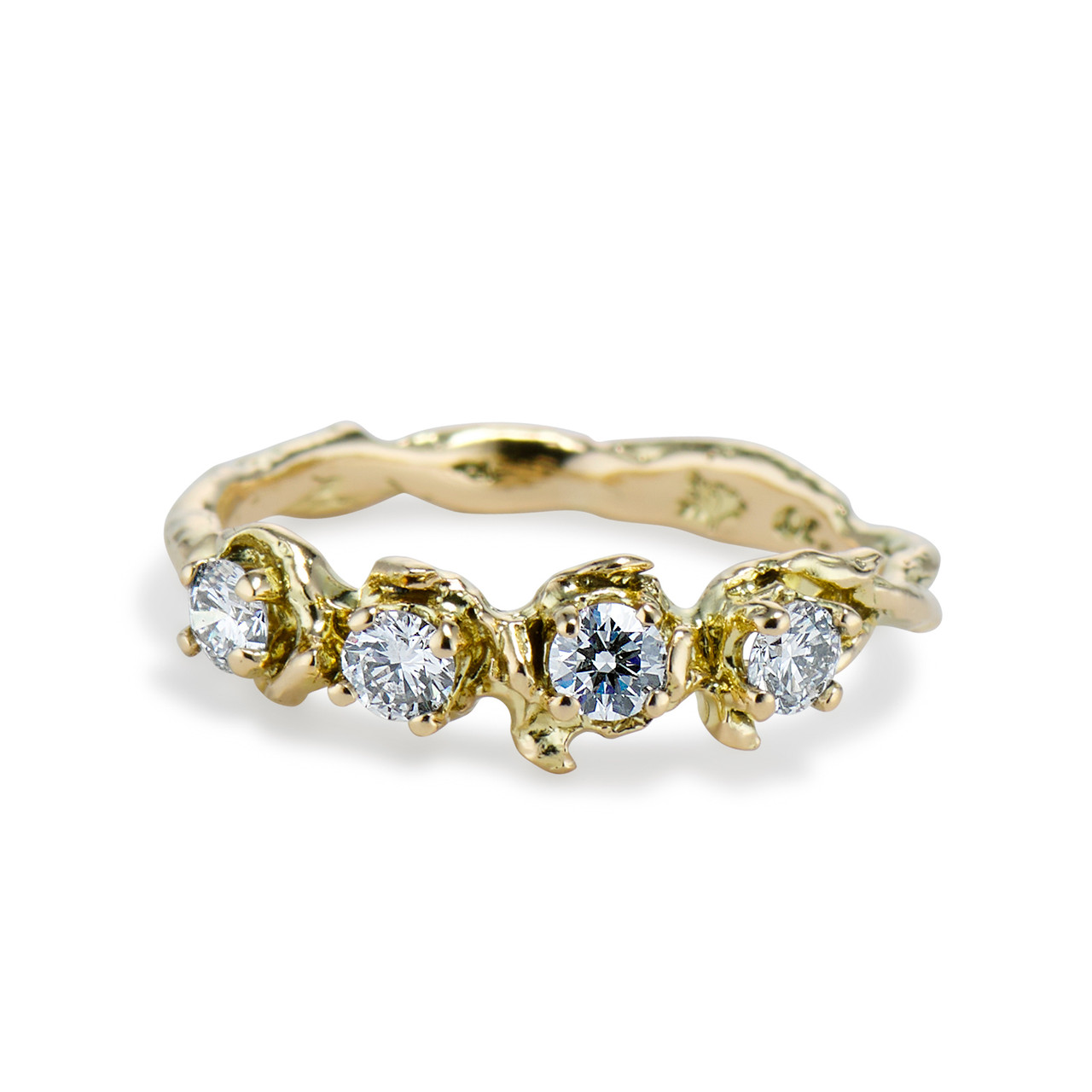 The breathtaking Union Diamond 4-stone diamond ring contains sparkling round brilliant diamonds in 18k or 14k white gold, yellow-gold, rose-gold, or platinum. The result is elegant look that is as luxurious as it is timeless. 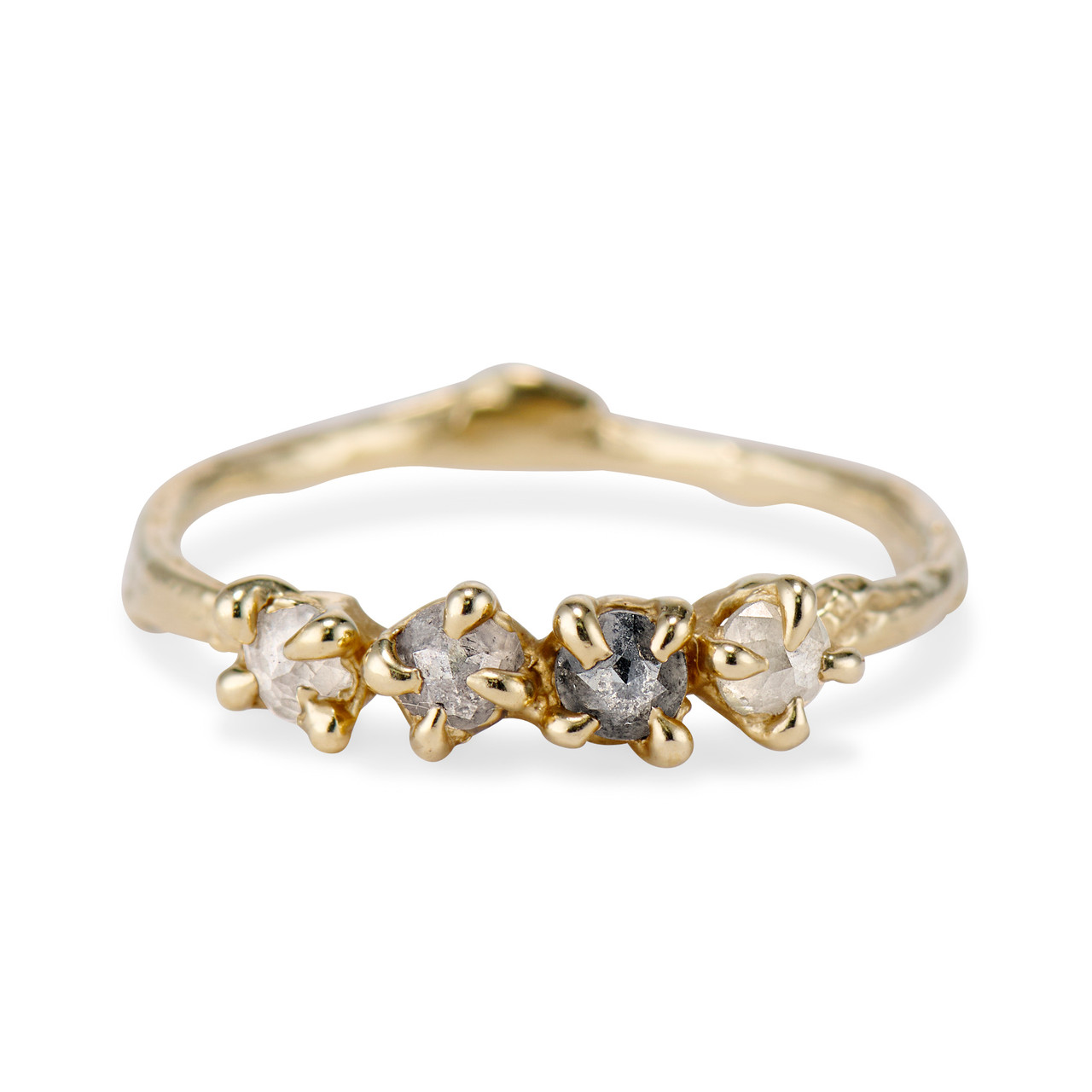 Show off your style with our Garland ring. Each rose-cut diamond displays a multitutde of the distinctive grey band and is unique in shading and gradient. A sophisticated ring to display your commitment and love, the Garland is sure to delight.

WHAT IS THE MEANING BEHIND A FOUR-STONE RING? 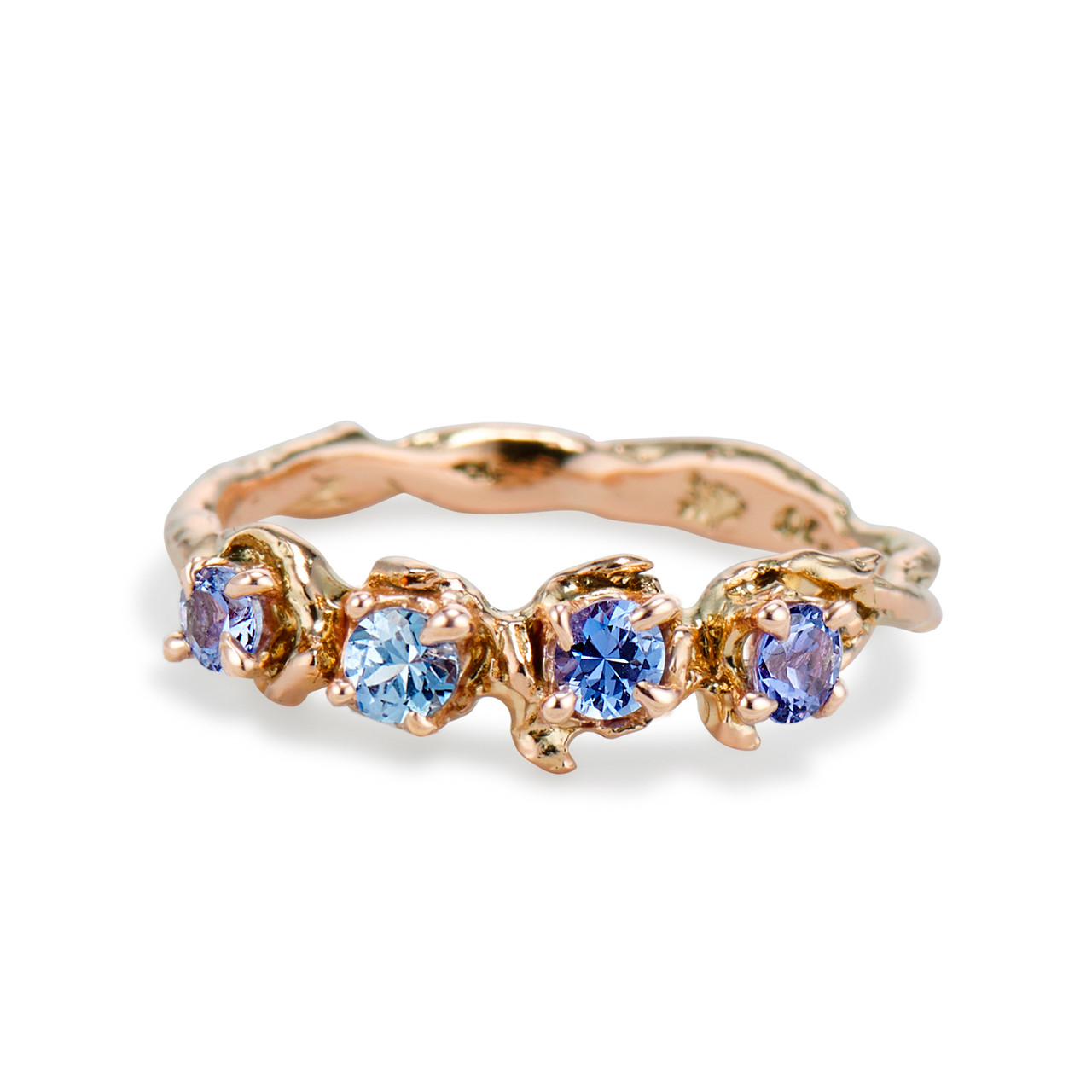 While there is no known specific meaning behind a 4-stone ring there are many interpretations of its symbolism. Often, a four-stone ring is a beautiful symbol of love, commitment, and friendship.

If you've ever given or received a four-stone ring, you're likely to feel its significance in your life. It can be an amazing way to commemorate a special occasion or event with your partner.

The four-stone engagement ring is a stunning testament to the depth of feeling and power of love that couples feel toward one another. Whether you are looking for an engagement ring with Montana sapphires, diamonds, or more, you can have faith in Olivia Ewing Jewelry. All of our handwrought rings are designed and forged to reflect the love that inspired them.

CHECK OUT OUR FOUR-STONE RINGS TODAY