What Are the [Redacted] and Why Are They Important in LOTR?

THE RINGS OF POWER FINALE EXPLAINED

We’ll be discussing the stunning finale of the first season of Amazon Prime’s The Rings of Power so if you’re not caught up on the intrigue and drama be warned - things will be spoiled! 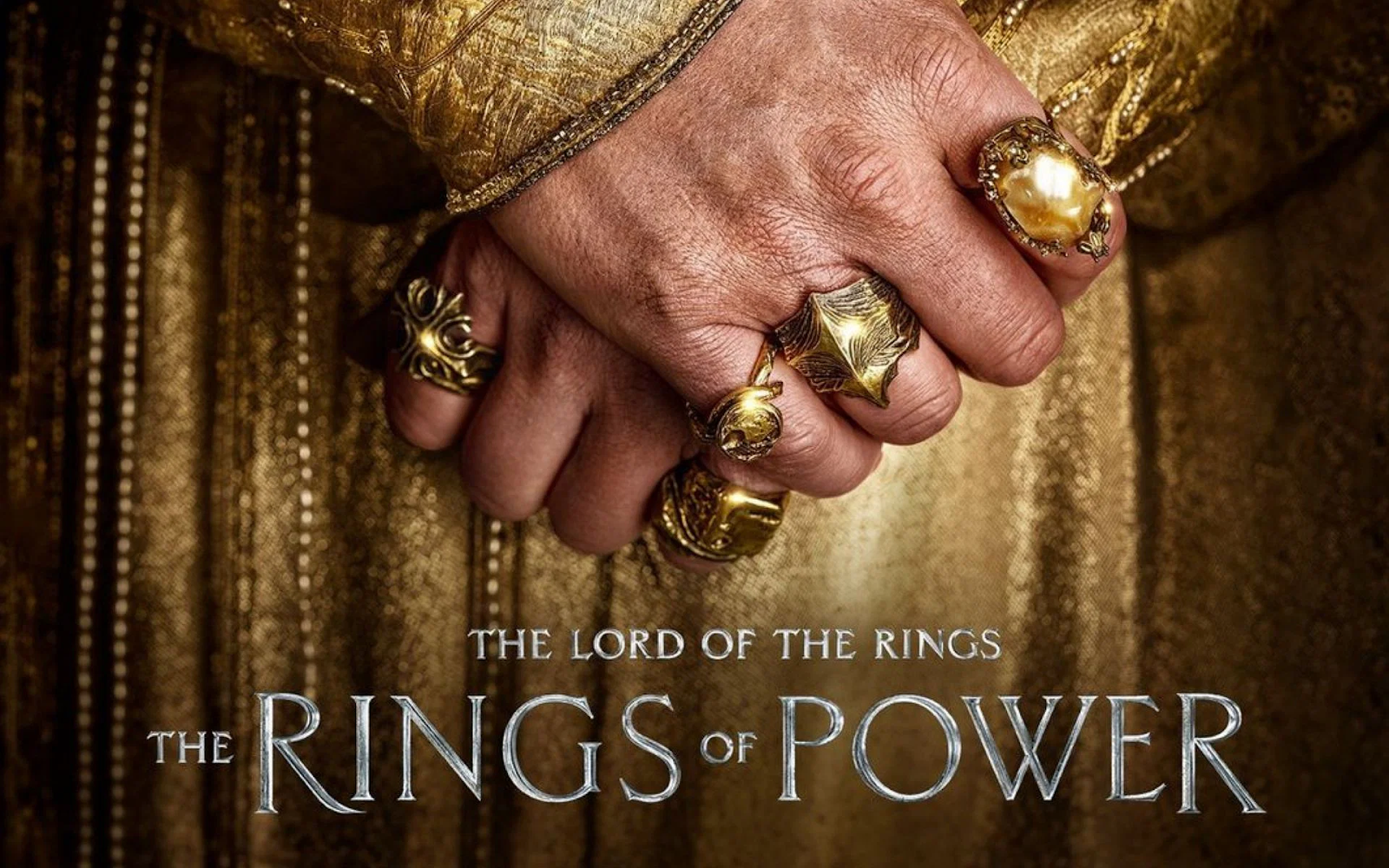 
Hopefully, those who have yet to view the finale are no longer with us, and, if you are - why haven’t you watched it yet? Go! It’s fantastic!

What’s better we finally have some of our most pressing questions answered. Sauron has been identified (Halbrand you sneaky sexy devil), Mordor -created, and the Stranger is actually… Gandalf? (Ok, that one isn’t confirmed yet, but his, “[...]Always follow your nose” line is repeated in the Fellowship of the Ring when speaking to Merry.

WHY WERE THE THREE ELVEN RINGS CREATED? 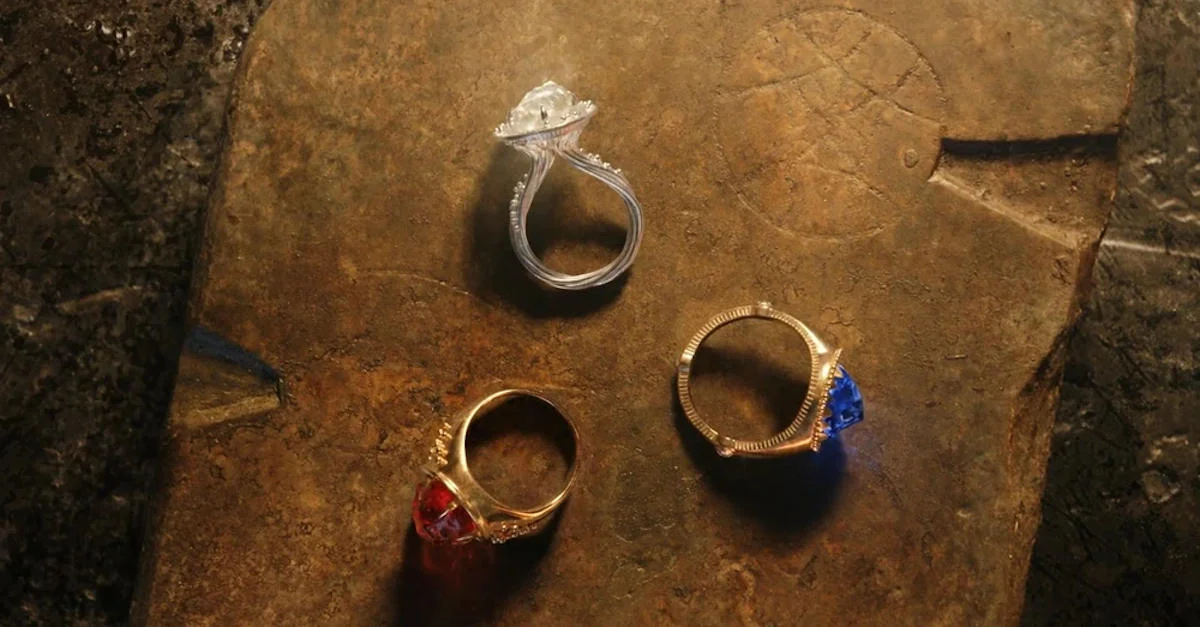 In the series, the High King of the Elves, Gil-galad, foresees the destruction of the elves. To prevent this from happening he enlists master blacksmith, Celembrimbor, to combine divine mithril with alloyed metals to forge the three elven rings.

Why rings? Primarily, this is due to the elves needing a powerful conduit for the precious mithril’s properties. The properties, after all, allow the elves to continue living as magical beings. But why rings and not a crown? Partially, because the elves wisely determined that it was better to split the power three ways in the form of a wearable ring. The less concentrated amount of power and more reputable bearers of the rings decrease the likelihood of that power being abused. And, when compared to one almighty crown it’s easy to see how three rings are preferable.

WHAT ARE THE THREE RINGS?

Okay, now we know why the rings were created but what do the rings look like?

NARYA - THE RING OF FIRE

The first of the Elvish rings, Narya, is known to be the Ring of Fire. And that's not its only name. Narya can be referred to as, "Narya the Great", "The Red Ring", and "The Kindler". In the book, Narya is described as having a red stone (which Tolkien later stated was a ruby), and an unknown metal.

Narya allows the wearer to inspire others to resist the temptation of power, greed, tyranny, domination, and despair while improving its wearer's resistance to the ravages of time.

The first wearer of Narya was Gil-galad, the High King of the Elves who passed Narya to his lieutenant, Cirdan for safekeeping. After Gil-galad's death at the hands of Sauron, Cirdan passed Narya to Gandalf. In fact, Gandalf is said to be skillful with fire, perhaps having fine-tuned this skill with the help of Narya.

At the conclusion of the series, Gandalf rides to the Undying Lands with Narya on his finger.

NENYA - THE RING OF WATER

The second ring, Nenya, also called "The Ring of Adamant" and "The Ring of Water" is made of mithril and adamant - a stone much like a diamond.

Nenya's power provides concealment and preservation from evil. And its one and only wearer, Galadriel, made use of these powers by creating and sustaining Lothlorien - the fairest realm of the Elves. Like Narya and Gandalf, Nenya and Galadriel travel to the Undying Lands and the power and beauty of Lothlorien eventually fade.

VILYA - THE RING OF AIR

The final - and often considered most powerful -Elvish ring, Vilya, is also called "The Ring of Air", "The Ring of Firmament", and "The Blue Ring". As its name suggests, its stone is a sapphire and the metal is gold.

Vilya's powers are never quite specified. However, readers speculate that Vilya was able to control the elements, often referencing Elrond's ability to summon a large wave of water to wash out the Nazgul. Like its ring brethren, Vilya sailed to the Undying Lands with it's one and only wearer, Elrond.

DO THE RINGS HAVE SPECIAL POWERS?

This makes sense when considering the fact that the three rings are the only rings to be forged without the touch of Sauron. Although Celembrimbor was influenced by Sauron in the forging of the rings, Sauron did not have a direct hand in their forging. So when he made the One Ring and placed it on his finger, the goodness of the Elvish rings alerted their wearers to the dangers and they immediately stopped wearing the rings for the remainder of Sauron's reign.

While you may not be able to wear one of the three Elvish rings of power, you can certainly find an engagement ring that maintains the original trio's magical feeling and depth of emotion. Below, we’ve highlighted some of our favorites.

IF YOU ARE DRAWN TO NARYA

With its rich red ruby and glistening metal, Narya is a sight to behold. Conjure the power of fire with ruby rings that gleam with an interior flame. 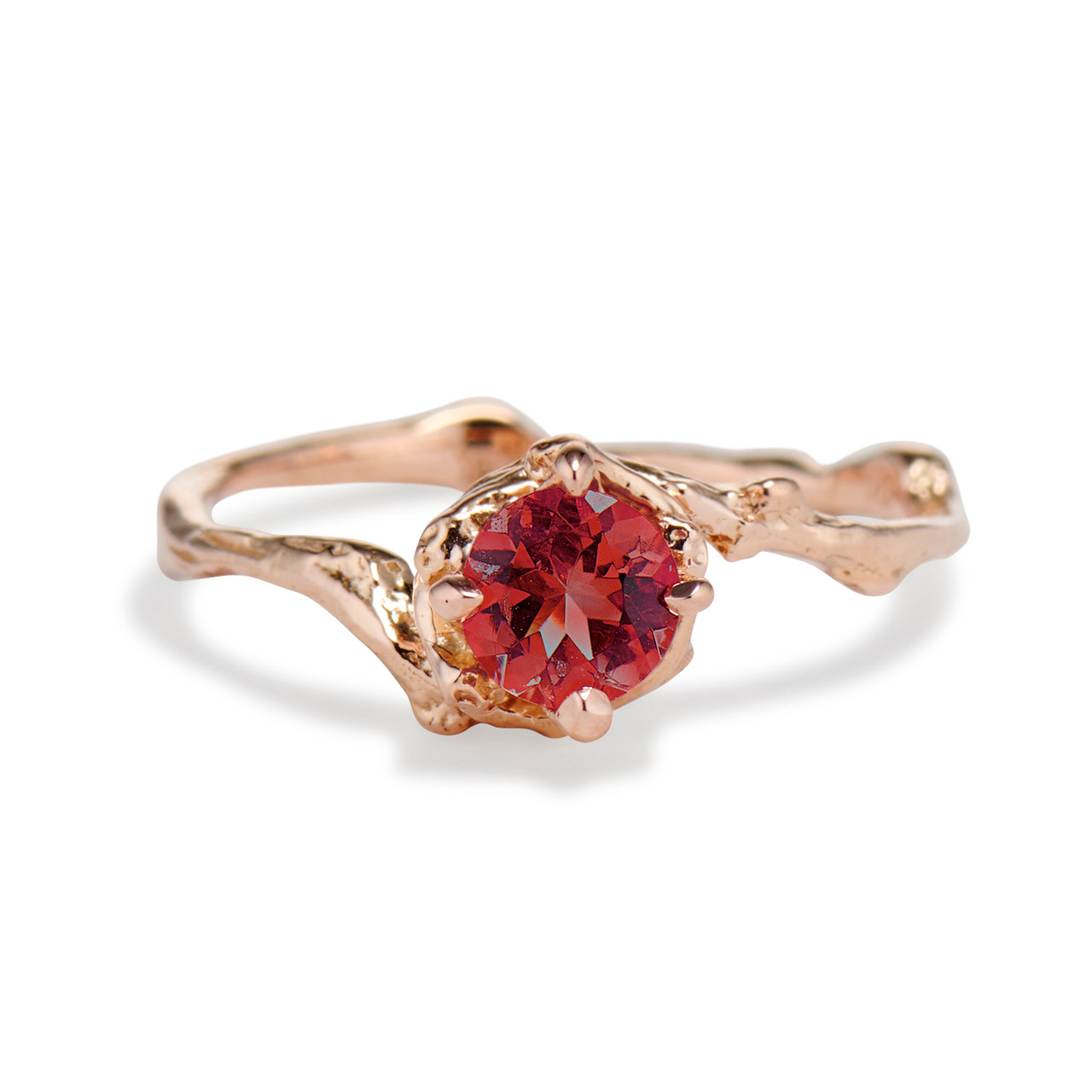 Like Narya, this stunning ruby ring emits flashes of warming light and hue. Its nature-inspired rose gold band was sculpted from an American Holly twig and features natural budded details and texture. With the Demi Naples Ruby Solitaire, you can easily and skillfully become one with the element of fire (though we wouldn’t recommend attempting to wield it as Gandalf did). 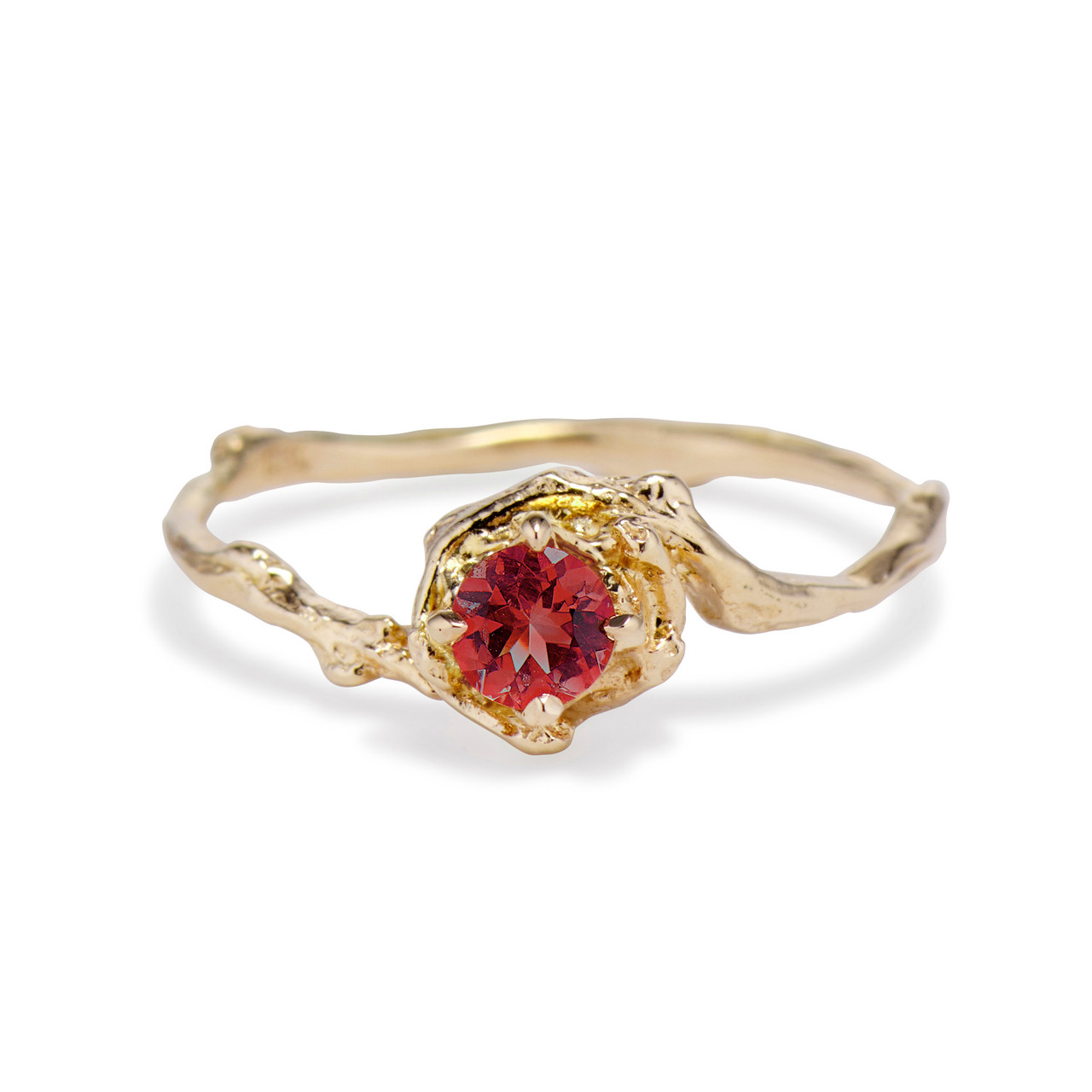 If you’re looking for a more delicate ruby ring, why not consider the Petite Naples Ruby Solitaire?

This beautiful ring features a 4mm round solitaire ruby stone set in white, rose, or yellow gold and is surrounded by tiny twig details. The center ruby proves to be an exciting focal point and emits a stunning sparkle as it catches the light.

IF YOU ARE DRAWN TO NENYA

Maybe you’ve found yourself drawn to Nenya, the Ring of Water. While not much is known about its center stone other than that it appears as a diamond, its band was silvery mithril. To highlight this, we’ve combed through white gold or platinum rings with brilliant center stones like diamond and moissanite. 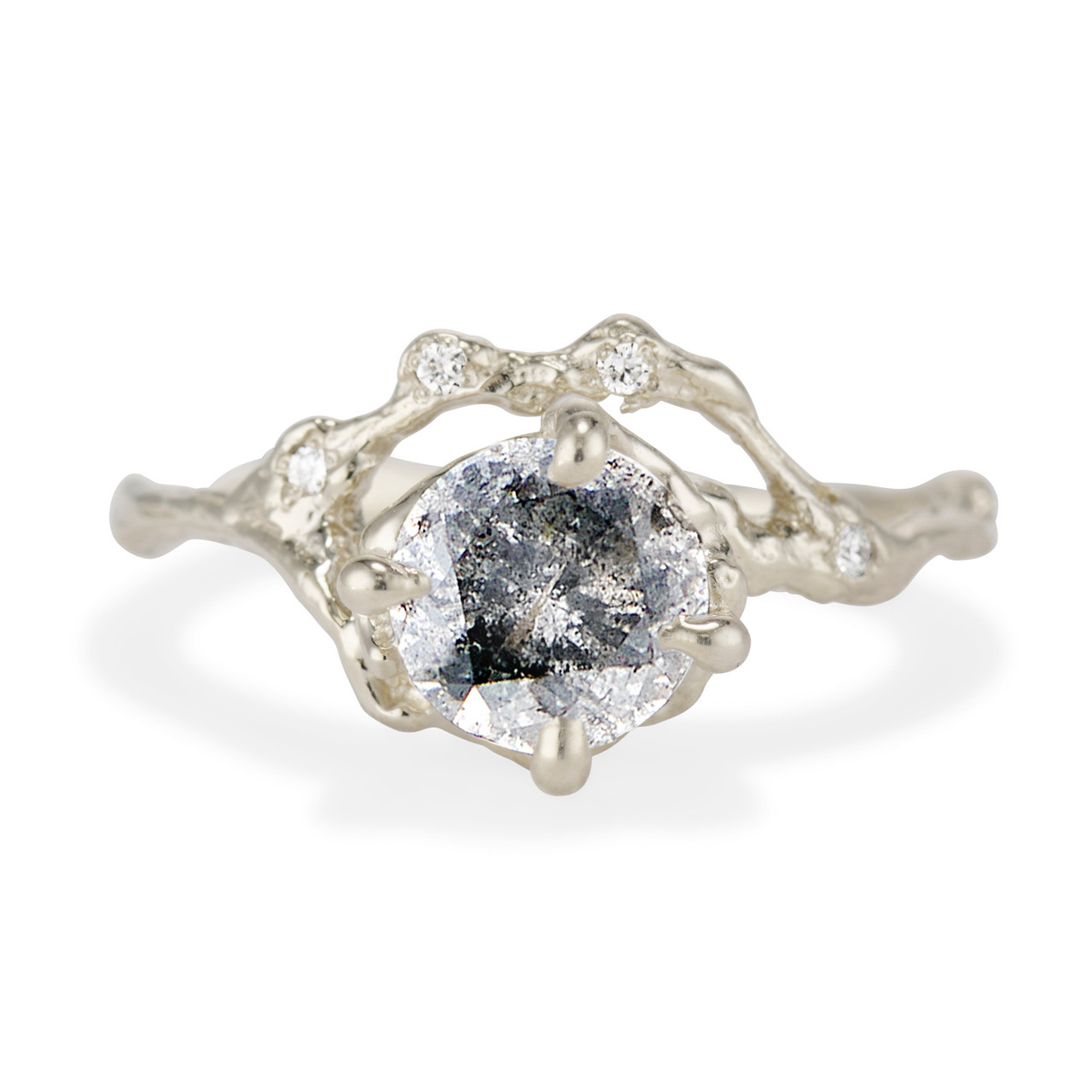 We're big fans of the look of this rose-cut salt and pepper diamond and think it perfectly encapsulates Galadriel's and Nenya’s personality. The white gold or platinum diamond is prong-set and framed by a stunning array of four melee diamonds in a half-halo effect.

The setting is elegant and refined, but with an edge—a little bit of grit to go along with the glitter. It's just the way we like our Galadriel! 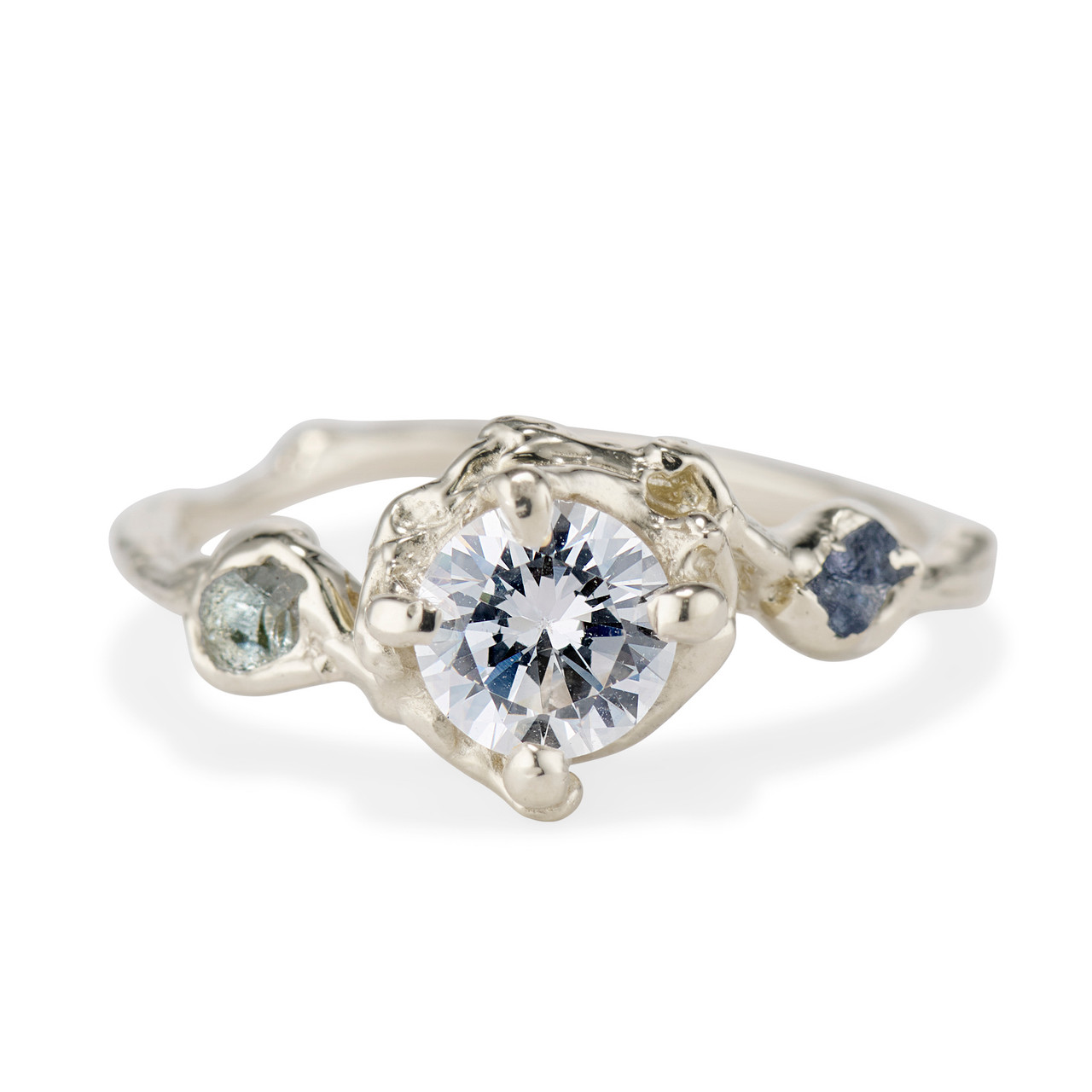 Nenya is the Ring of Water, and we think the Naples Moissanite & Montana Sapphire Trio ring perfectly sums up the cool tones and movement of babbling brooks streams.

Cool tones and movement are what makes this ring so special. Two Montana sapphires set on either side of the brilliant-cut moissanite appear as water droplets, while the moissanite stone in the middle represents the flowing current beneath them.

IF YOU ARE DRAWN TO VILYA

Vilya is the most powerful of the three rings so it’s no surprise if you feel drawn to it! We can’t help but admire its gleaming band and luscious blue sapphire. 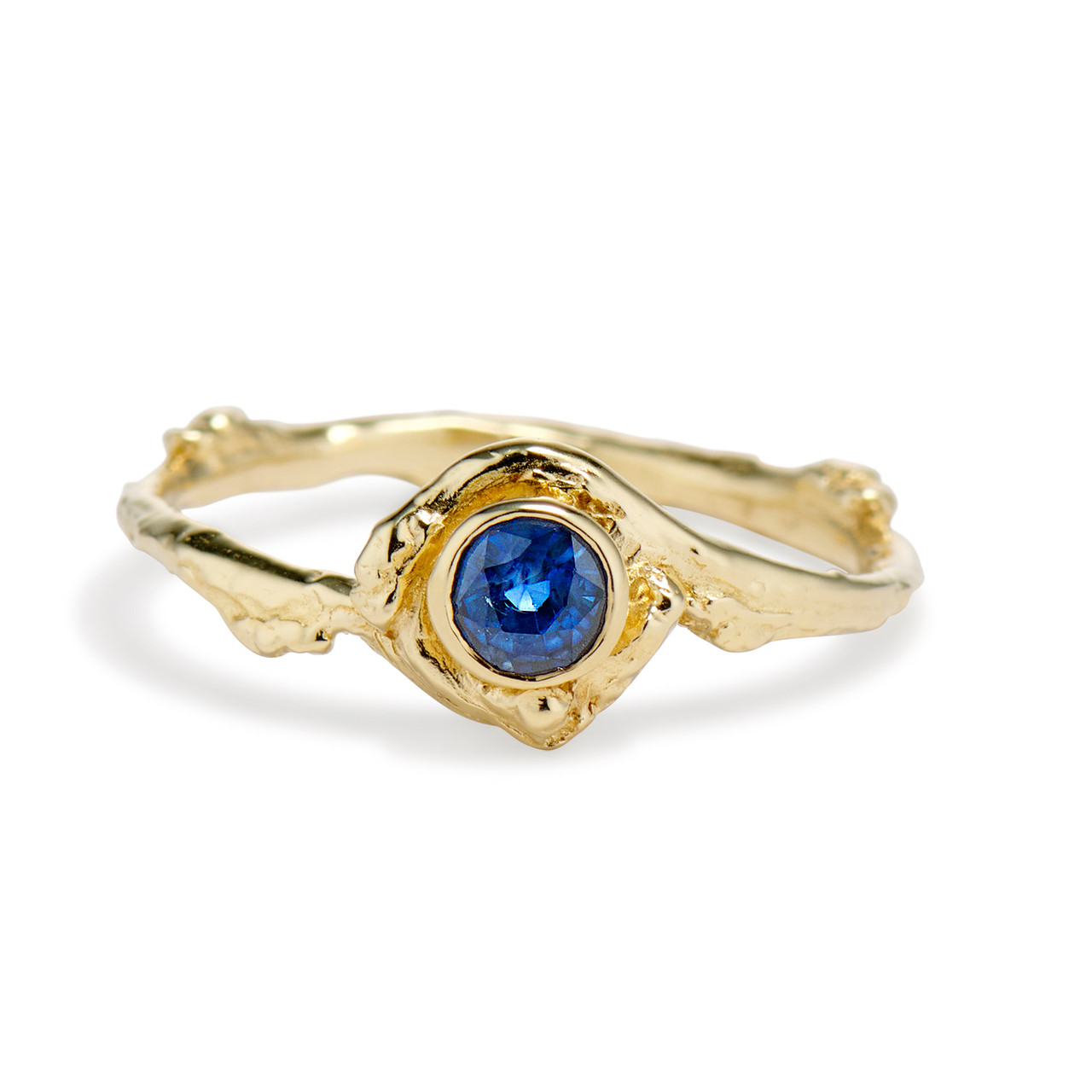 We can truly feel the power of Vilya when we gaze at the Sidney Solitaire Sapphire Ring. With a shimmering yellow-gold band that has been hand-cast from an organic foraged twig and a remarkable bezel-set blue sapphire, the Sidney is a sight to behold. 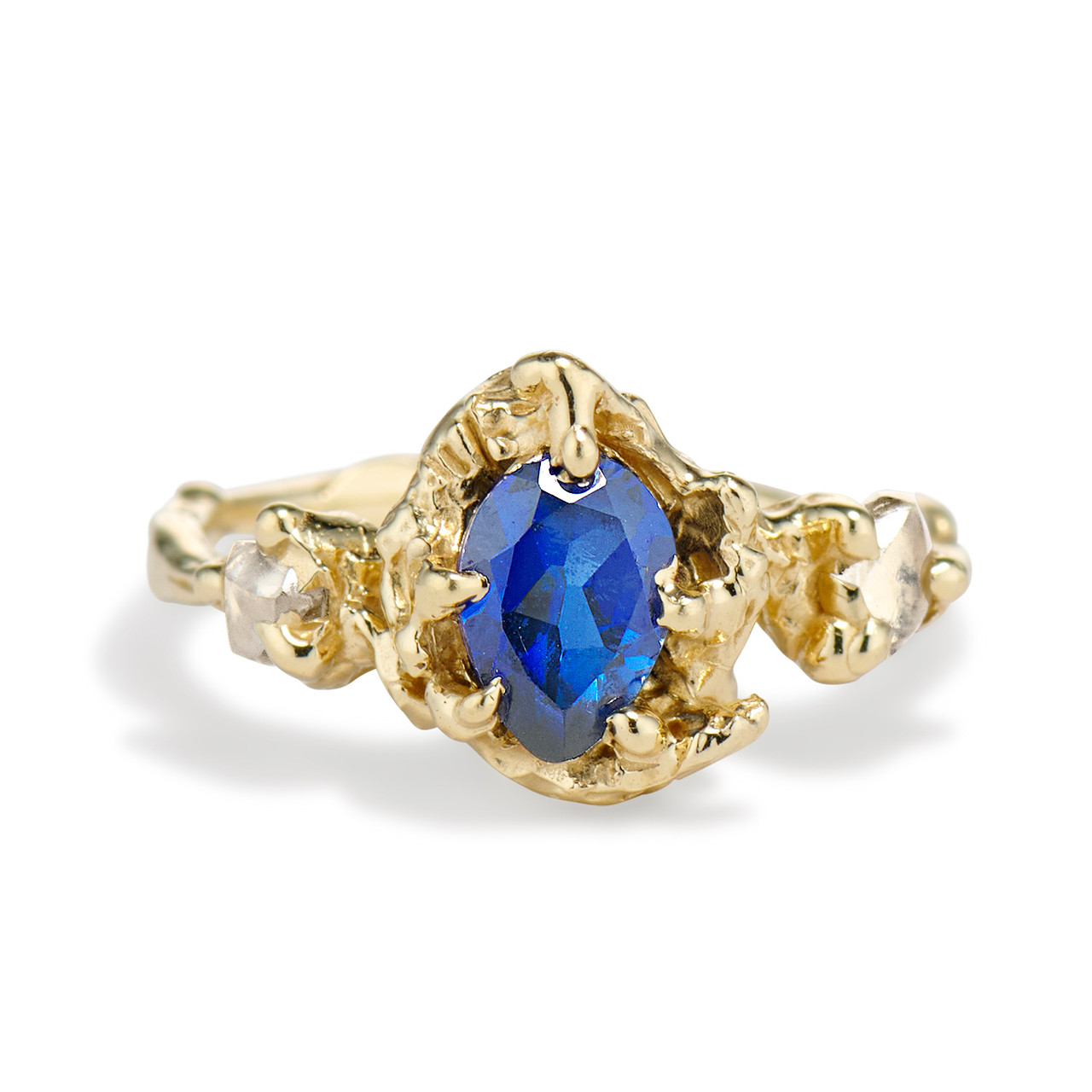 Like Vilya, the Naples Pear Sapphire Trio Ring has a commanding presence and perfectly encapsulates all three of the Elvish Rings. A vibrant, blue, pear-shaped sapphire is at the heart and center of ring and is flanked on either side by two inset rough-cut diamonds. Five prongs securely clasp the stone in place allowing it to safely go with you on any adventure that arises.

If you are looking for a unique engagement ring with elvish flair look no further than Olivia Ewing Jewelry. Our unique pieces are crafted from ethical sources and with everlasting quality. So while an Olivia Ewing engagement ring may not allow you to manipulate the elements, turn invisible, or prolong life, they can do something even more important -symbolize your everlasting love and devotion.