What Olivia Ewing Ring Would Each Character from Rings of Power Wear?

It is Amazon’s most expensive undertaking. The rights were bought in September 2017 for $250 million, Amazon has committed to five seasons of the show, which means that to produce the whole thing, will cost them a whopping $1 billion dollars. On top of that is the actual budget to produce the show, $715 million dollars, resulting in a first season value of just under a billion by itself.

Mind-boggling numbers aside, it seems as if the high budget and hype are real. The show is a visual feast with sumptuous visuals, a moving plot, and a stunning score composed by Bear McCreary. But as we watch each new (and old) character be introduced we couldn’t help but wonder…what ring would each character be proud to wear? So, without further ado, here are the primary characters from The Lord of the Rings: The Rings of Power and the corresponding rings that we think each character could totally rock. 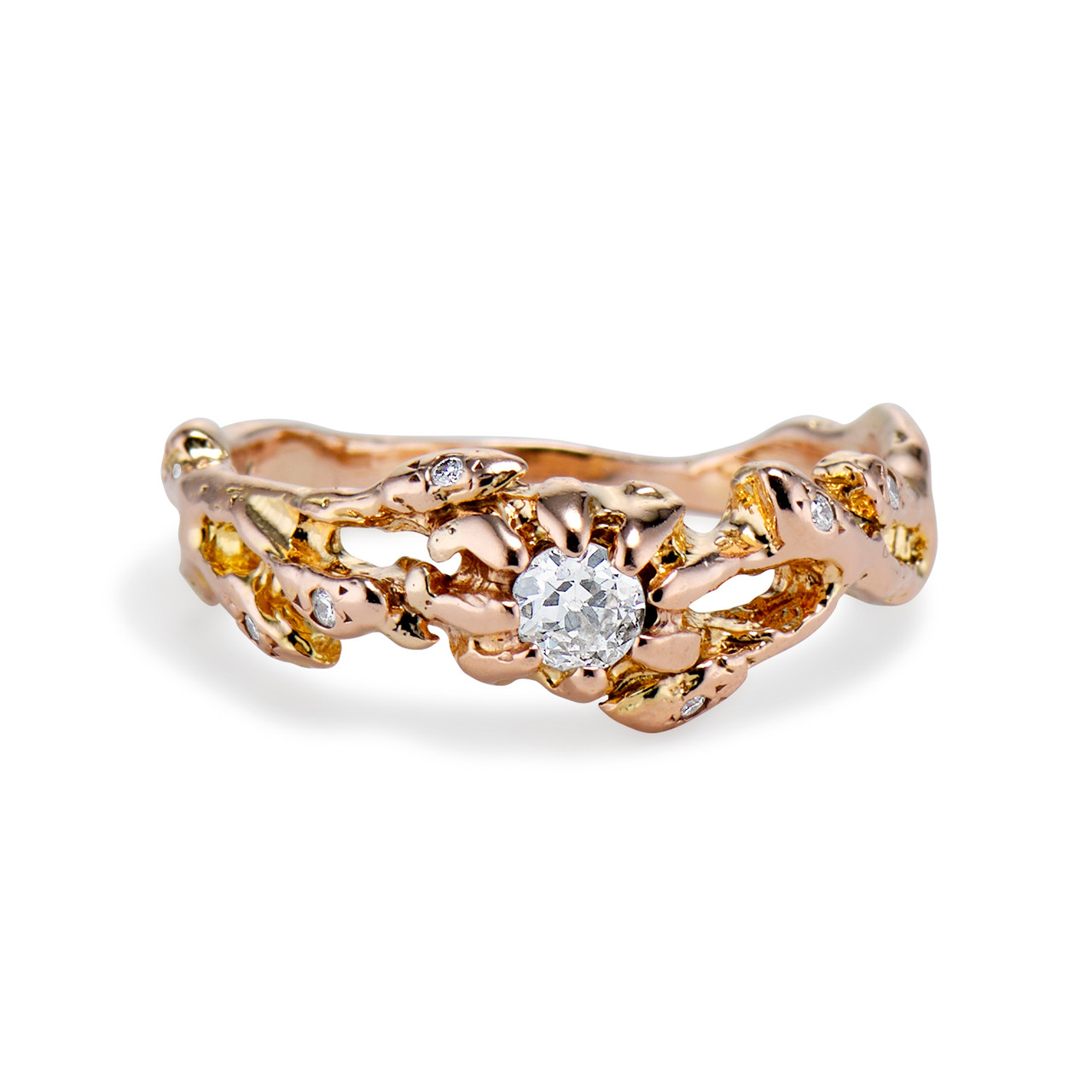 
In The Rings of Power, Galadriel has not yet become the serene Lady of Lothlorien we know and love in The Lord of the Rings. Instead, she is young and fierce, seeking revenge on Sauron after he murders her older brother, Finrod.

Galadriel is a badass and she needs a ring that is stunning enough to complement her ethereal beauty while secure enough to hold up as she scales walls of ice and kills Orcs. For this reason, we think, the Roma Antique Diamond Solitaire Ring would be a perfect fit.

Like Galadriel, the Roma Antique is mesmerizing and complex. Its center 0.13ct diamond glitters securely from its six-prong setting while eight melee diamonds softly glow nestled within their golden nests. The rose-gold band is an intricate blend of sculpted gold that creates a vine-like setting reminiscent of warm sun rays casting shadows on the ground beneath a tree in Valinor. 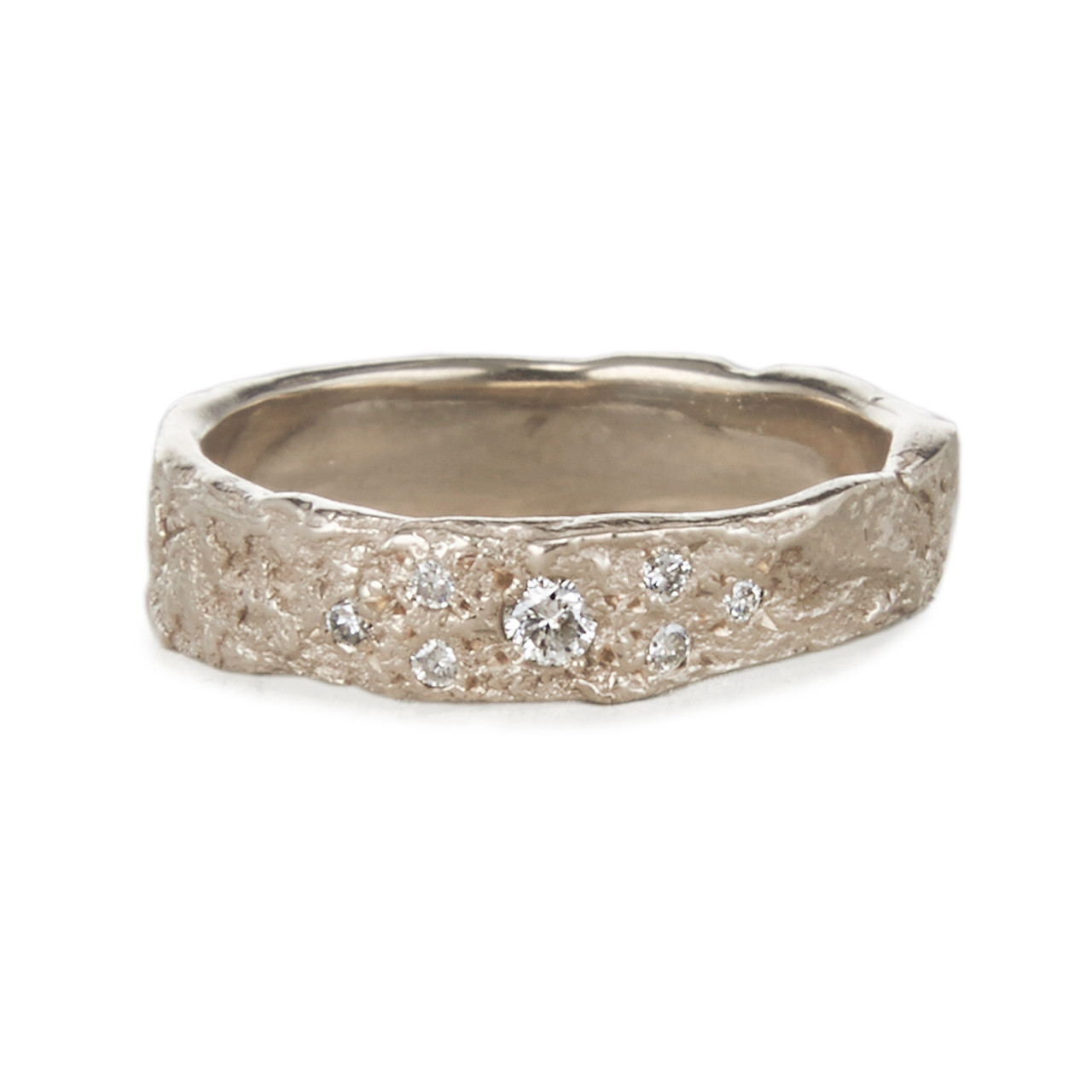 At the start of The Rings of Power, Elrond is still a relatively young half-elf of only 1558 years. Despite his age, he has managed to climb the ranks of Elvish politics to be assigned to assist the master Elven smith, Celebrimbor.

Elrond is young and naive in Elvish years but comes from a noble family. He is the great-grandson of Luthien, son of Eärendil, and twin brother to Elros, the first King of Numenor. Suffice it to say, at the beginning of Rings of Power Elrond feels the pressure to prove himself. 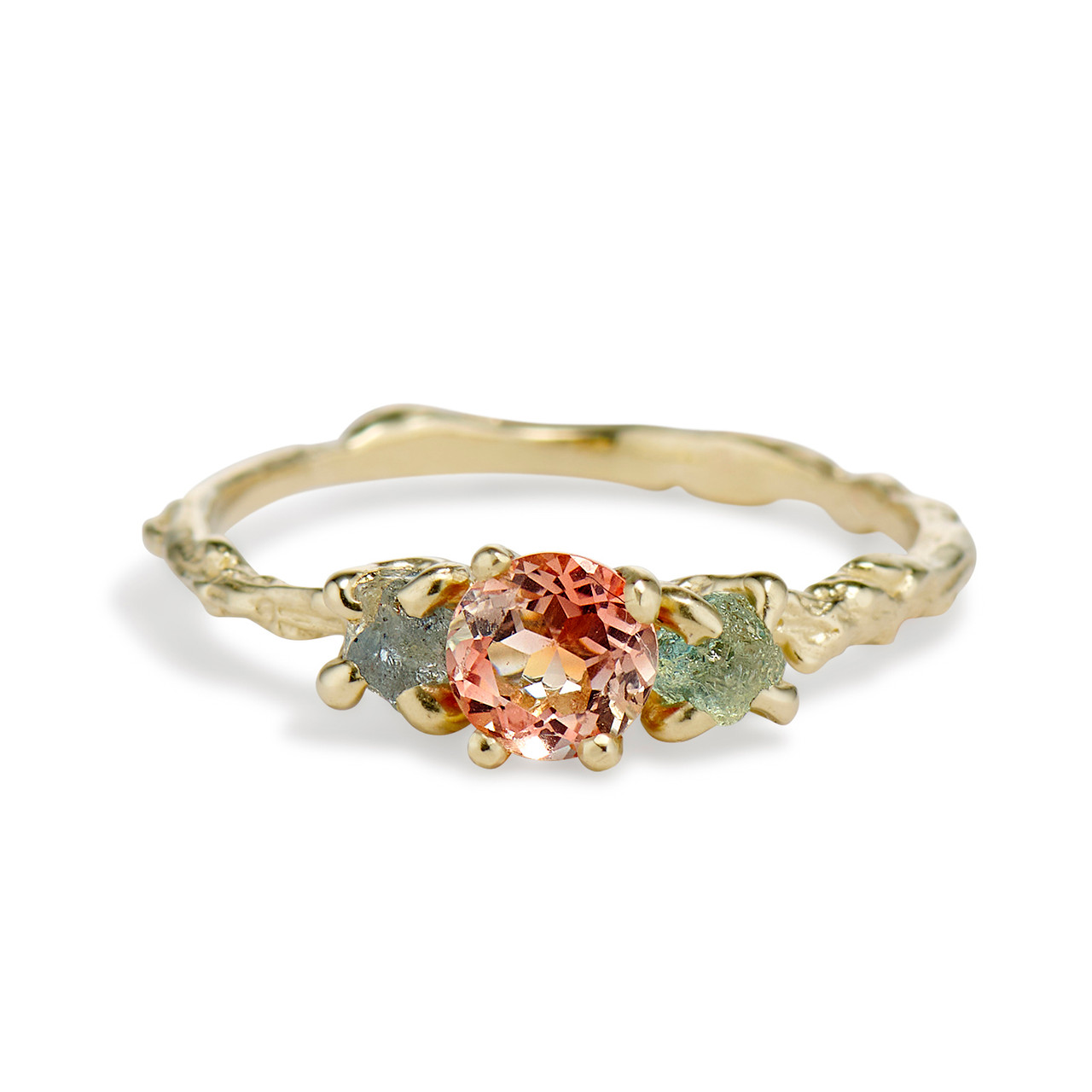 Elanor ‘Nori’ Brandyfoot is a young Harfoot that yearns for adventure and certainly finds it after discovering ‘The Stranger’. The Harfoot race is a predecessor to the Hobbits that we know and love. Harfoots are a community-based migratory people that eventually settle in what we consider the modern-day Shire.

Throughout the first few episodes of the series, Nori proves that she is a compassionate young Harfoot, skilled at navigating the earth and woods around her home. She is also good with animals, having nursed an injured baby eagle back to health in the past.

Our Naples Oregon Sunstone Three-stone ring conjures the forests that Nori makes her home with a glowing pink Oregon sunstone elegantly framed by two rough uncut Montana sapphires in tones of green and teal. The Oregon sunstone is a particularly potent stone for healing and is connected with the Heart chakra making it perfect for an open-hearted Harfoot like Nori. 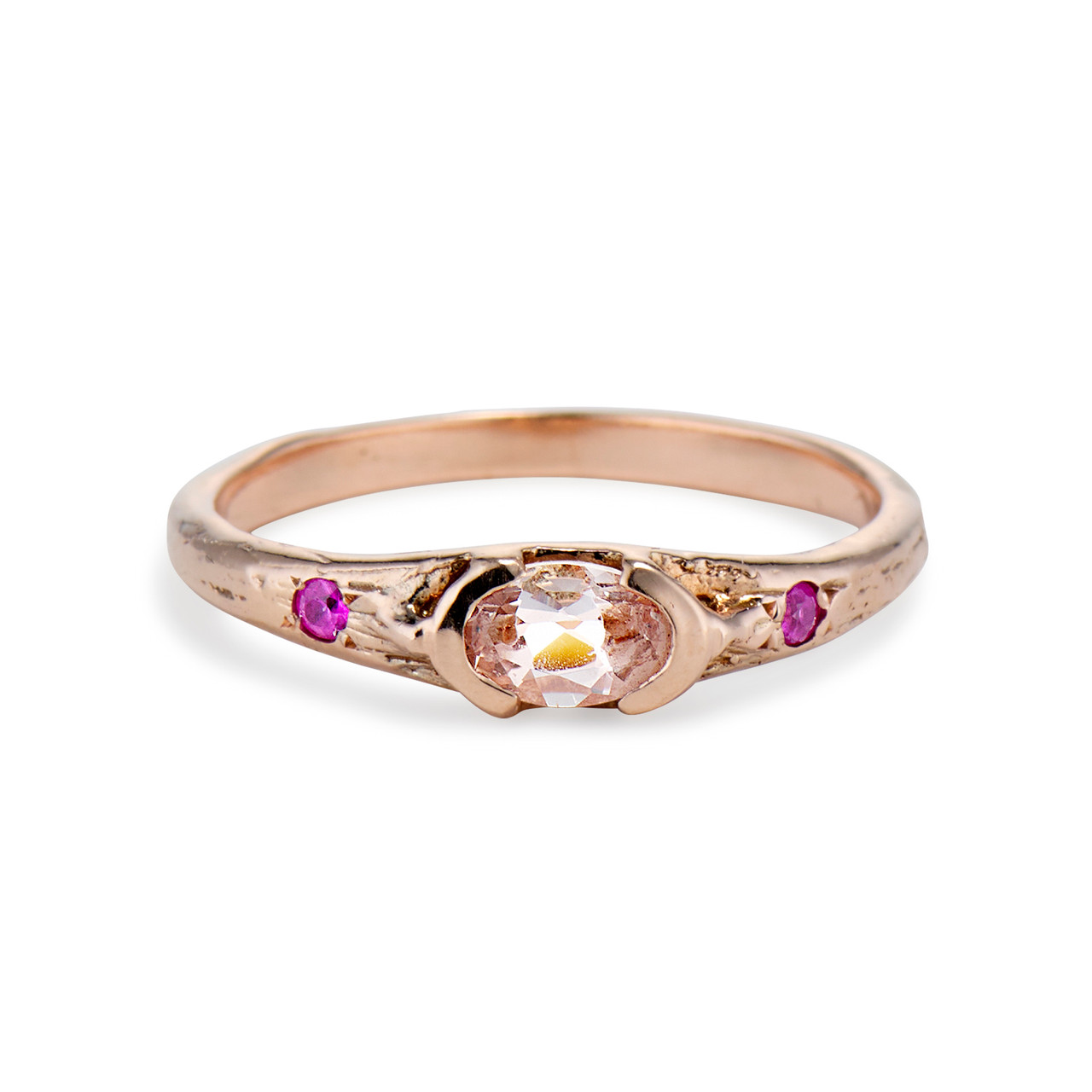 Believed to be the reincarnation of Durin I as he embodied him in both looks and manners, Durin IV is the energetic Prince of Khazad-Dum. All Dwarves are known to be partiers and excellent craftsmen and miners of mithril, a silvery, precious metal that is lightweight yet incredibly durable. Dwarves are

Durin embodies his people's love for gold, gems, and mithril with his energetic personality and lust for life. For this reason, we think that Durin IV would positively adore the Calais Morganite Bezel Ring. The Calais has a creamy rose-gold band that perfectly complements the center half-bezel set blush morganite stone. Prince Durin’s long red beard would prove a perfect complement to this stunner of a ring.

With its signature bezel setting and sparkling gemstones, the Calais Morganite Bezel Ring is an excellent choice for any wearer who appreciates fine craftsmanship and stunning beauty. 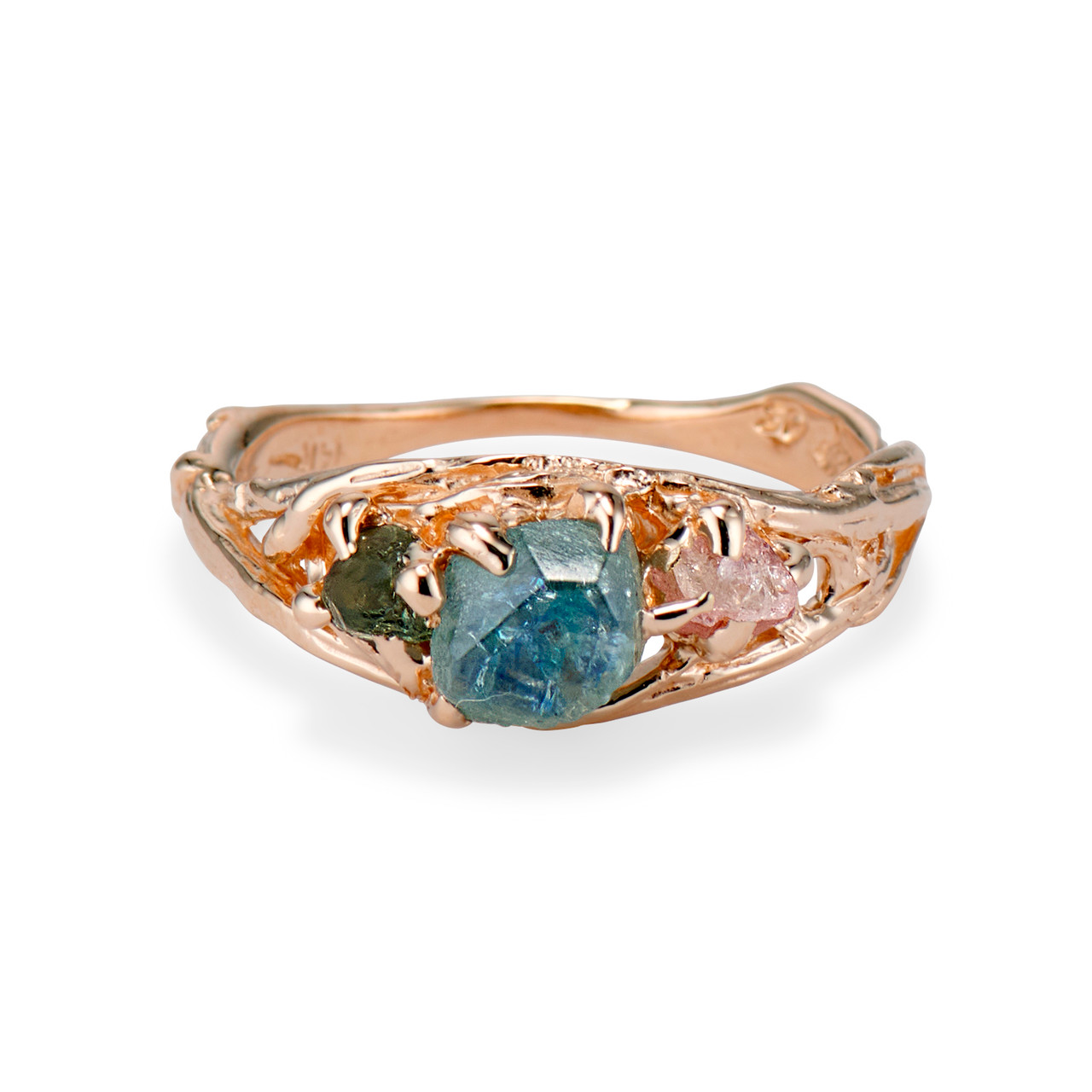 Disa, wife of Prince Durin IV, is a Dwarven princess and mother. As is the case with most Dwarfs, Disa is a lover of all things fun and sparkly. Her welcoming personality is big, bold, and infectious, at times much to Durin’s dismay.

In the second episode after Elrond requests the opportunity to make an apology to Disa for missing both her wedding to Durin and the subsequent births of their children, Durin instructs him, “absolutely no staying for dinner”, fortunately for Elrond, Disa is much faster to forgive and commands him to stay for dinner.

The Knox Sapphire Three-Stone Ring is a perfect match to Disa’s warm-hearted and commanding presence. The semi-faceted teal Montana sapphire proudly glitters center stage while two contrasting green and pink raw Montana sapphires provide additional glitz and sparkle. A spectacular ring, the Knox Sapphire is perfect for a woman who knows who she is and isn’t afraid to voice her needs, much like Disa herself. 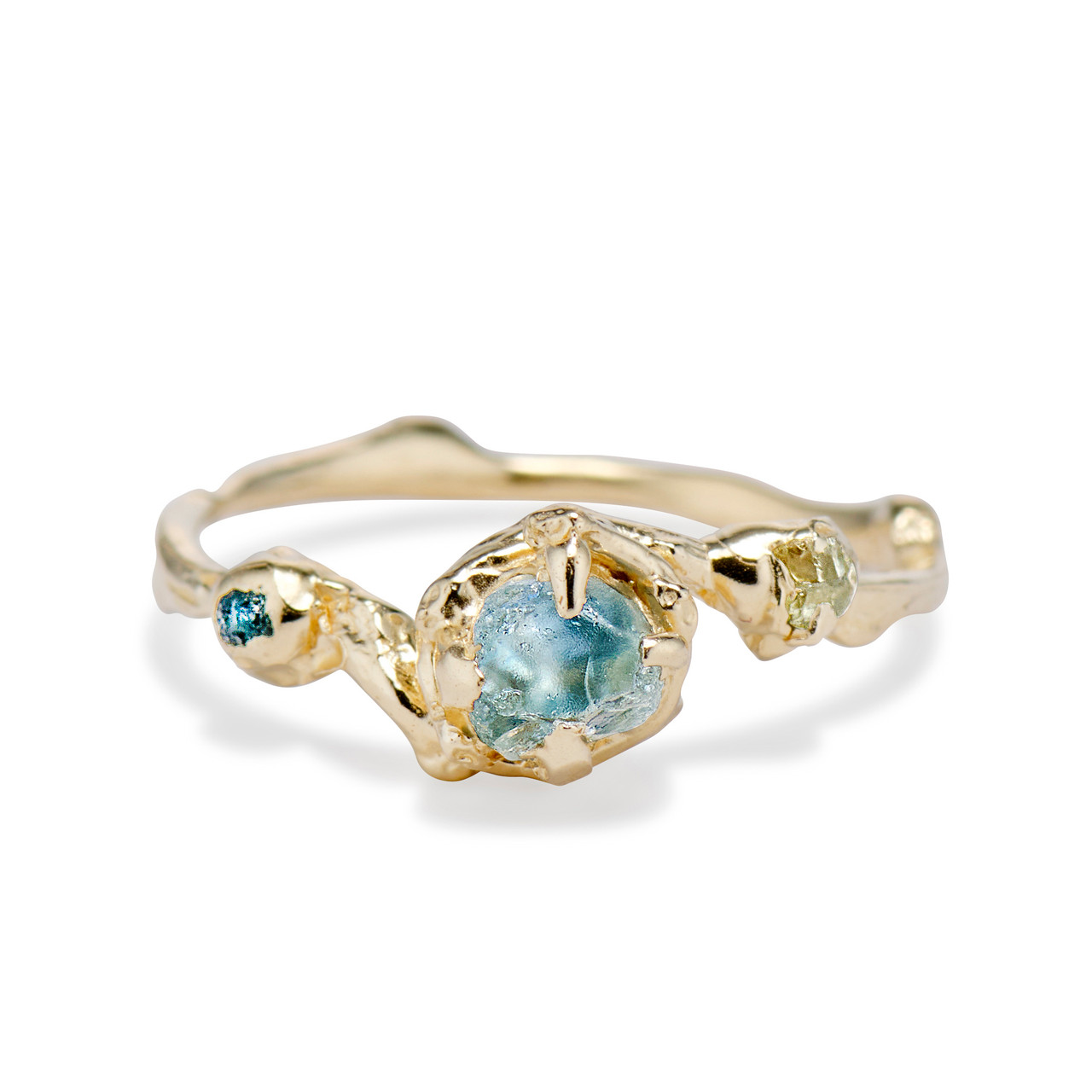 While Bronwyn may seem unassuming and quiet in the first three episodes of Rings of Power, the series hints that there may be more to her than meets the eye especially when it concerns the elf Arondir.

Bronwyn is a healer, and we can think of no perfect ring for her other than the Naples Round Montana Sapphire Trio Ring. Montana sapphire has long been espoused for its healing properties as well as its ability to bring mental clarity and calming energy. The center rough Montana sapphire glows brilliantly blue against its textured yellow-gold band while two additional Montana sapphires provide additional calming glitz.

Bronwyn's calm demeanor and ability to heal others make her a natural healer—and this jewelry certainly complements her character well. 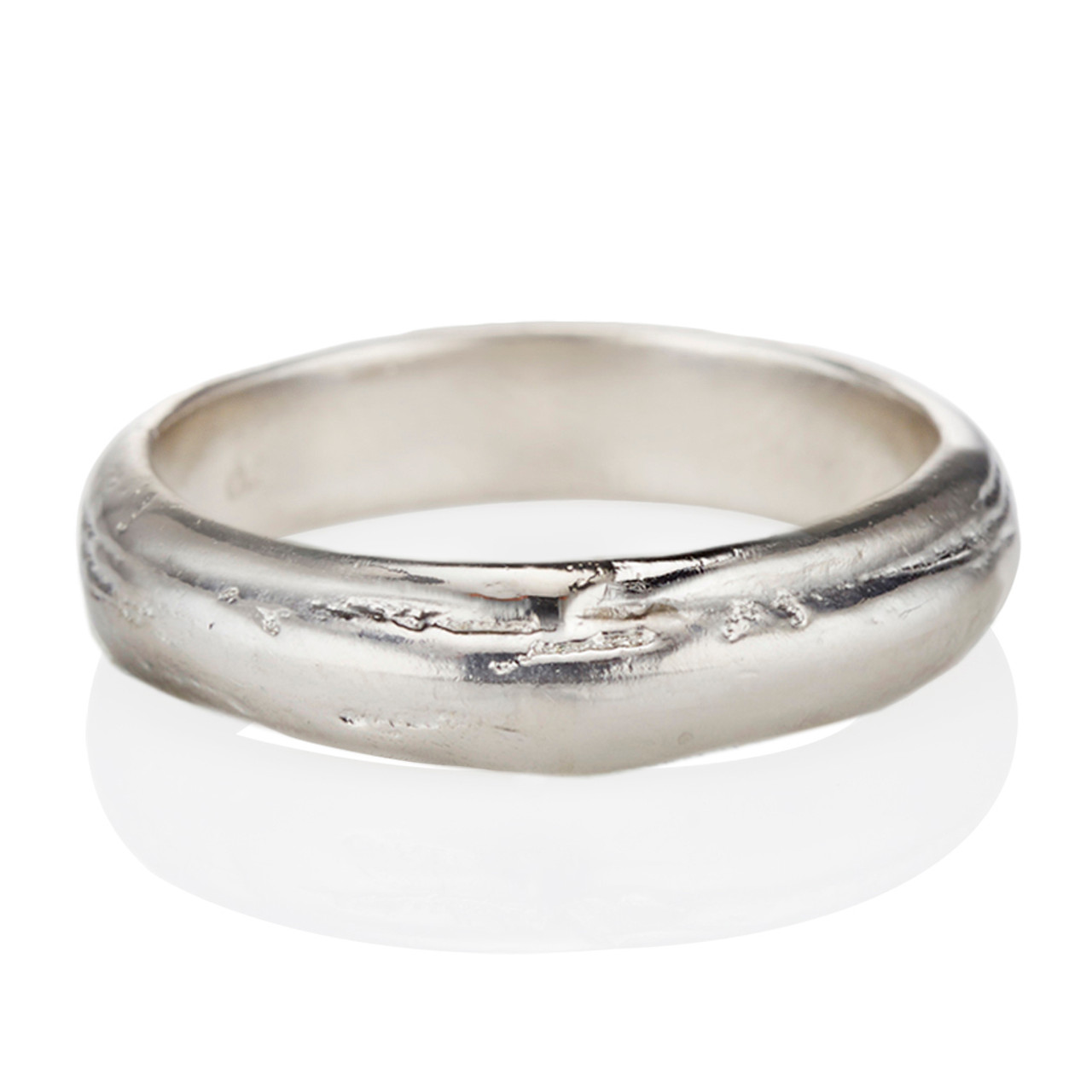 We first meet Halbrand at sea with a band of humans fleeing a sea-serpent. At the last moment, after the party forsakes Galadriel, it is Halbrand who splits from the group and chooses to journey on with (and save) Galadriel.

The third episode further fleshes out Halbrand with the revelation that he is the lost king of the Southlands. While little is known about Halbrand and his past there is much speculation about his future.

We think that the Driftwood Ring perfectly sums up Halbrand’s conflicted past, what else could represent an adrift King? Our Driftwood Ring is made in platinum, palladium, rose, white, and yellow gold, and was sculpted from real driftwood foraged from the coast of Maine. 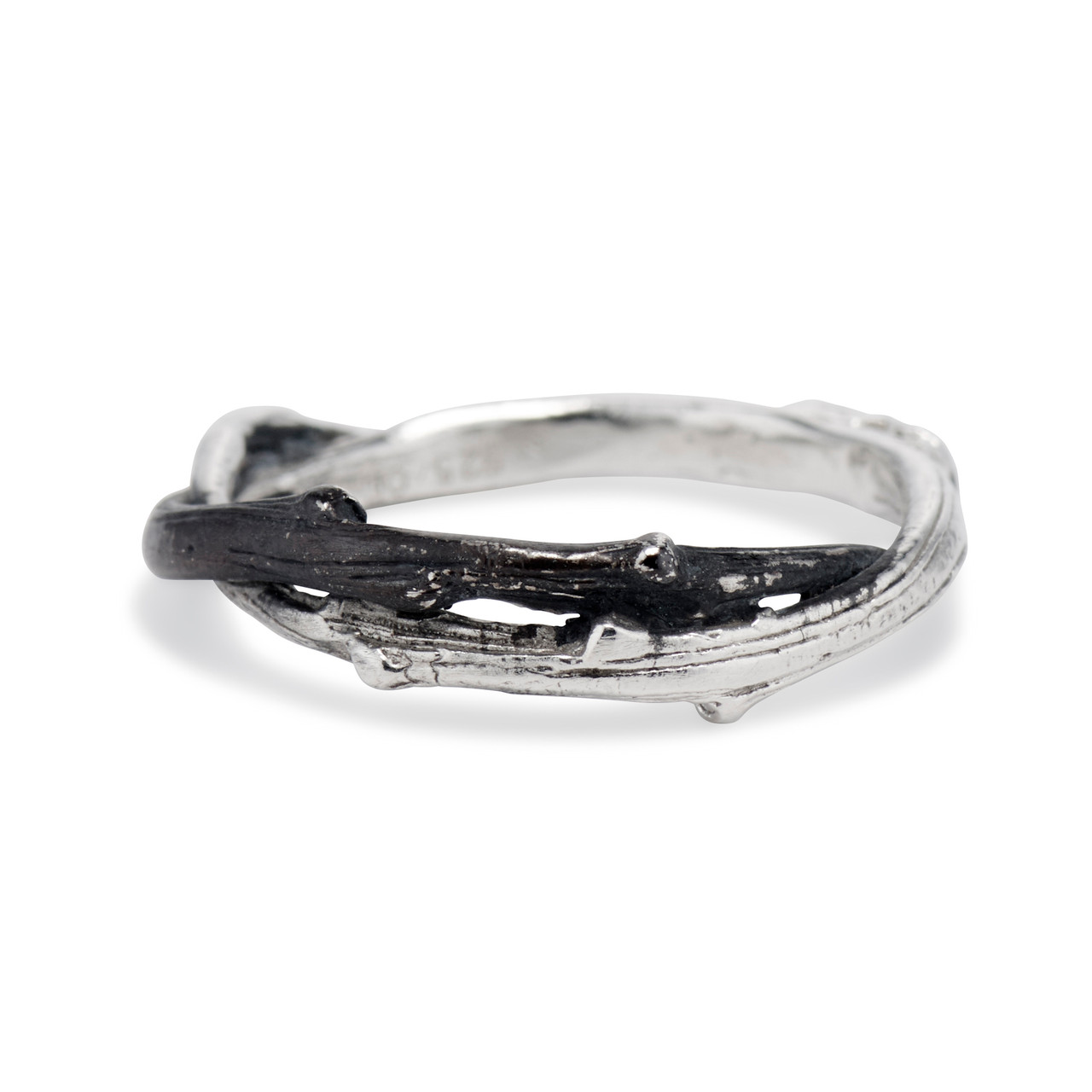 Both strong and serious, the Elf, Arondir has served as a watcher of the Southlands for 79 years. Arondir has a soft spot for the human people, especially the healer Bronwyn. This is notable, especially for the fact that they fought with Sauron against the Elves. Arondir always looks to do the right thing, choosing to investigate Hordern despite being relieved of his duty.

The Silver Unity Ring is a perfect reflection of Arondir’s torn feelings between his duty to the Elves and admiration of Bronwyn. Two conflicting feelings weave themselves throughout his narrative to inform his character development. 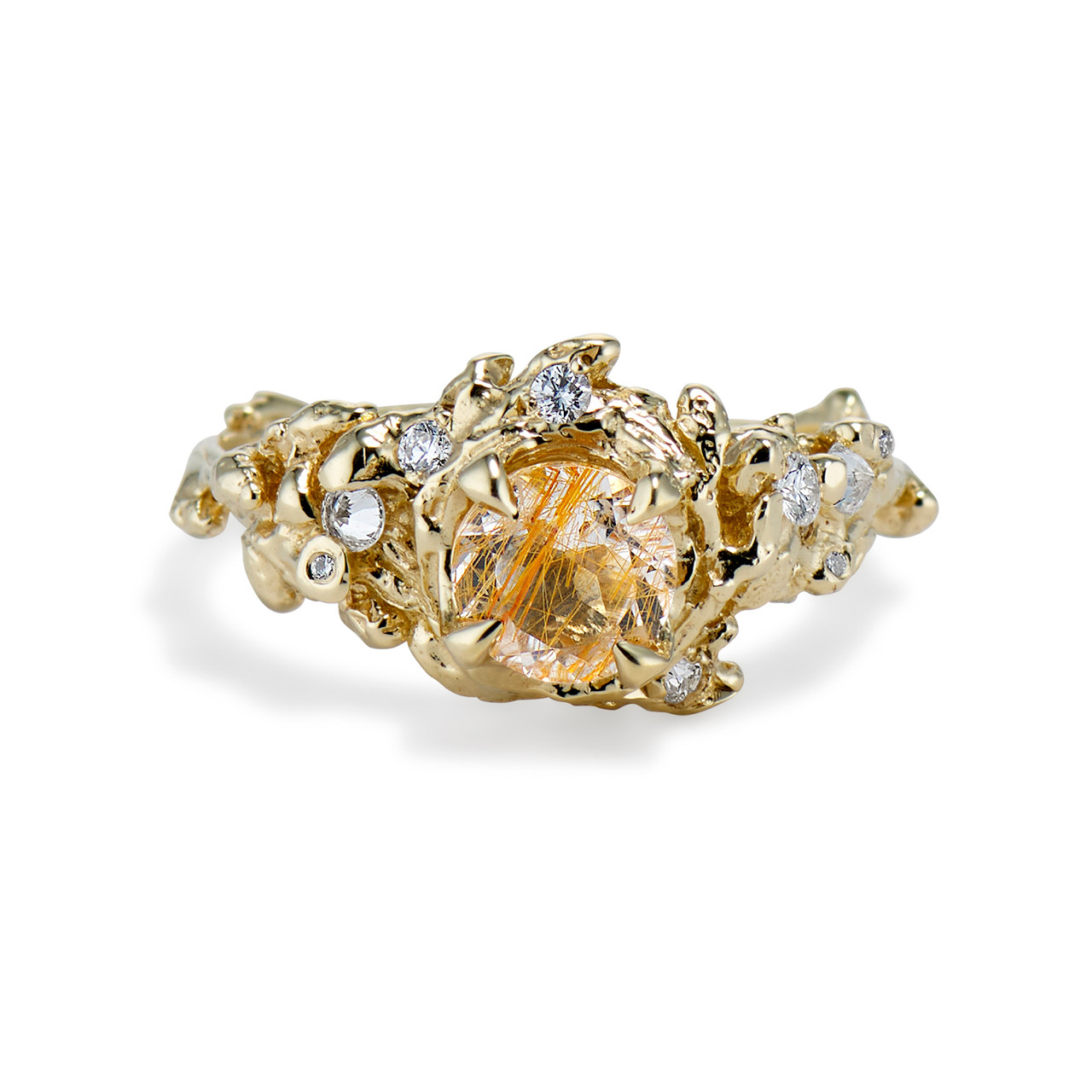 Queen Regent Miriel stuns in the third episode of Rings of Power as a capable commander and leader of the Numenor people. Queen Miriel isn’t afraid to take up space and command attention much like the Isle Rutilated Quartz Solitaire Ring.

This ring is as showstopping as Miriel with a remarkable center cut rutilated quartz that is surrounded by a crown of glittering pave diamonds. The yellow-gold band was sculpted from an actual twig and delicate real leaf buds for a look that is as regal and elegant as Miriel herself. 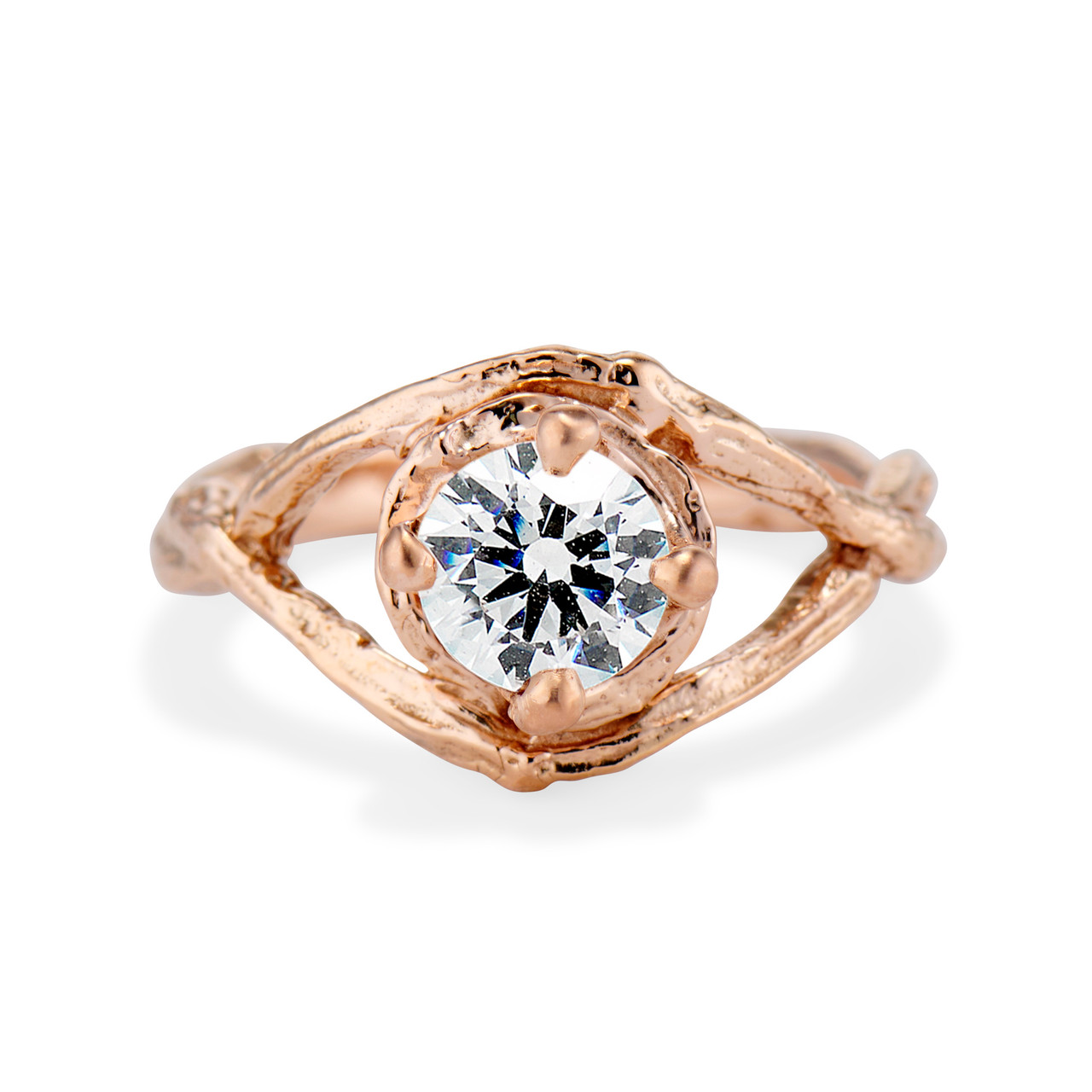 OK, OK, we really don’t know anything about the Stranger that fell to Middle-Earth via meteor yet but we couldn’t help but assign the Stranger a moissanite ring.

Moissanite is very often found in fragments of meteors… much like the Stranger, it is quite literally out of this world. What better to reflect the mysterious Stranger than the Chelsea Moissanite Solitaire Ring? This ring features a stunning 0.80-carat moissanite stone that gleams between two entwined Dragon’s Claw twigs. And while the Stranger may not quite understand how to wear a ring, we think that once he gets the hang of fine motor skills, he could totally rock it.

Even though we’re just three episodes into The Rings of Power we can’t help but be impressed with the lush scenery and full-hearted, expansive, characters. We can’t wait to see how the story plays out and hopefully, some of our questions are answered.

In the meantime, we are going to continue imagining our favorite characters wearing these rings…at least it will tide us over until the next episode comes out!