"I WOULD HAVE GONE WITH YOU TO THE END, INTO THE VERY FIRES OF MORDOR"

In J.R.R Tolkien's masterpiece series, The Lord of the Rings, the Ranger of the North, Aragorn goes by many names including Elessar, Strider, Thorongil, Estil, the heir of Isildur, and eventually, King of Arnor and Gondor.

We, however, just like to call him a Hunk.

Maybe it’s his enduring strength and inclusivity towards characters of all races and species, his kindness and perseverance, or maybe Viggo Mortenson’s stunning good looks and phenomenal performance as the Ranger of the North in the Lord of the Rings movie franchise. Regardless, we can’t help but swoon every time he’s on our screen or page, especially, as he interacts with his one true love Arwen.

We’ve rounded up the top 10 men's rings we could totally see Aragorn traveling to Mordor and back for so read on and remember to repeat after us: “He’s just a fictional (and taken) character…” 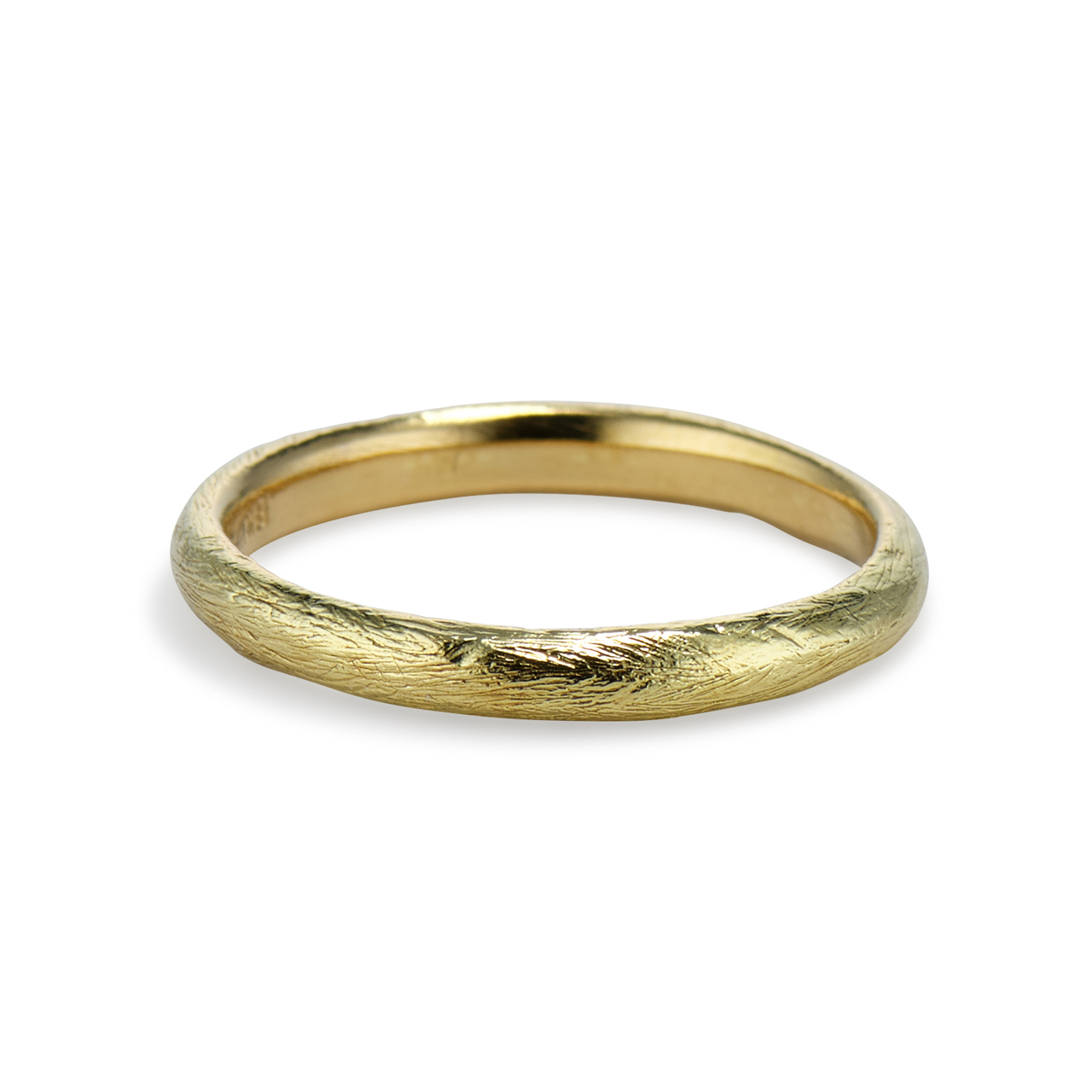 The Lee Ring won’t make you invisible, in fact, it will do just the opposite….make you stand out! The 5mm 100% recycled gold ring is hand-carved and features a unique textured surface that conjures up the movement of wind whistling through the very woods in which Aragorn patrolled as a ranger.

Plus, because the band has been designed to prevent the signs of scratches, it’s a perfect option for people who work with their hands, whether it be wielding a sword named Anduril or otherwise. 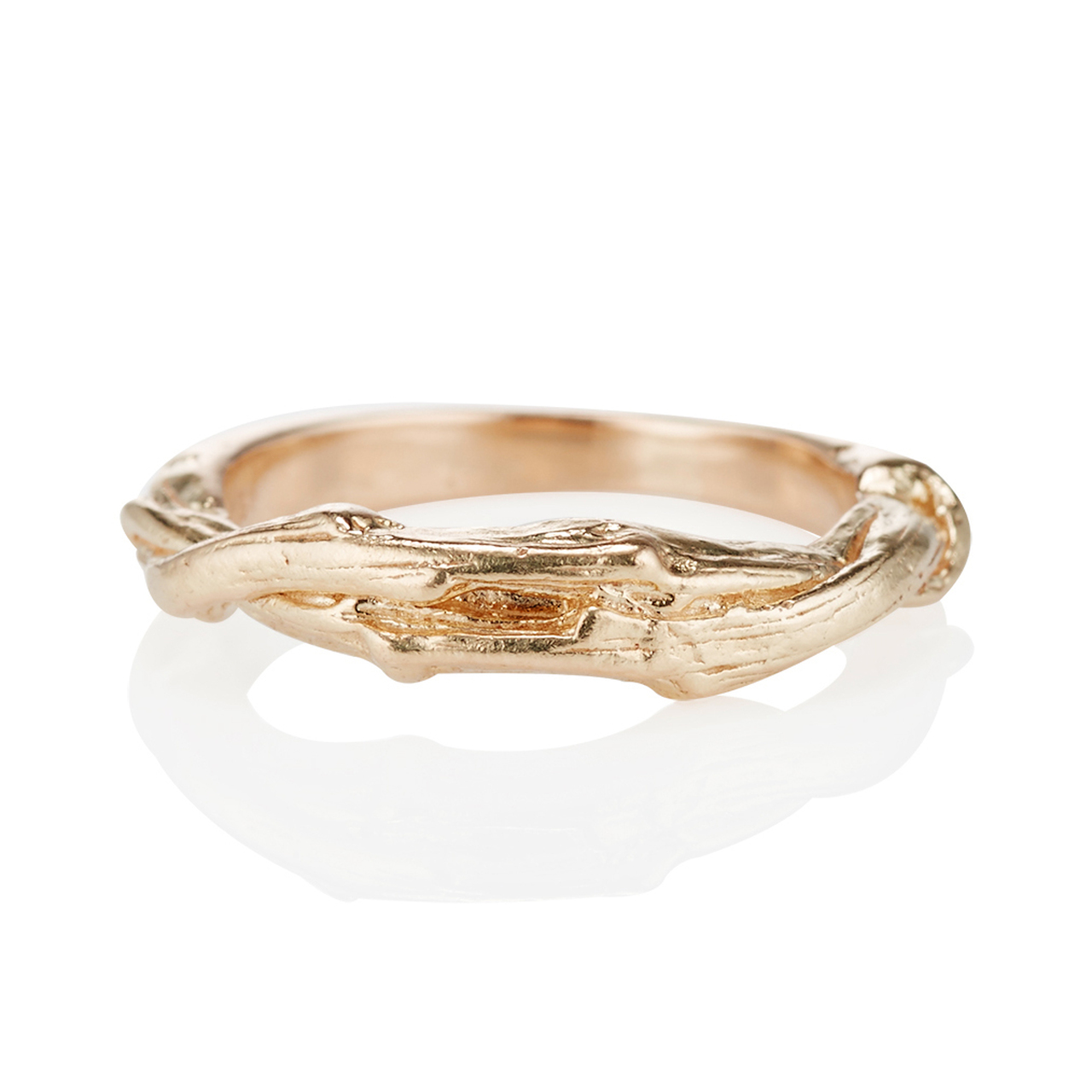 Aragorn and Arwen first meet in the forest of Rivendell. Aragorn, so overwhelmed at Arwen’s beauty, actually believes that he must be dreaming. It was also there, in the wooded forest that Arwen beheld Aragorn 29 years later and upon seeing him, "laden with flowers of gold" decided to forfeit her eternal life to pledge her troth to him.

Why not celebrate your union with a ring that invokes the spirit of the forest in which Aragorn and Arwen met? The Harmony Ring features the intermingling of two sculpted branches that have been hand cast from real twigs to represent the conjoining of your lives. 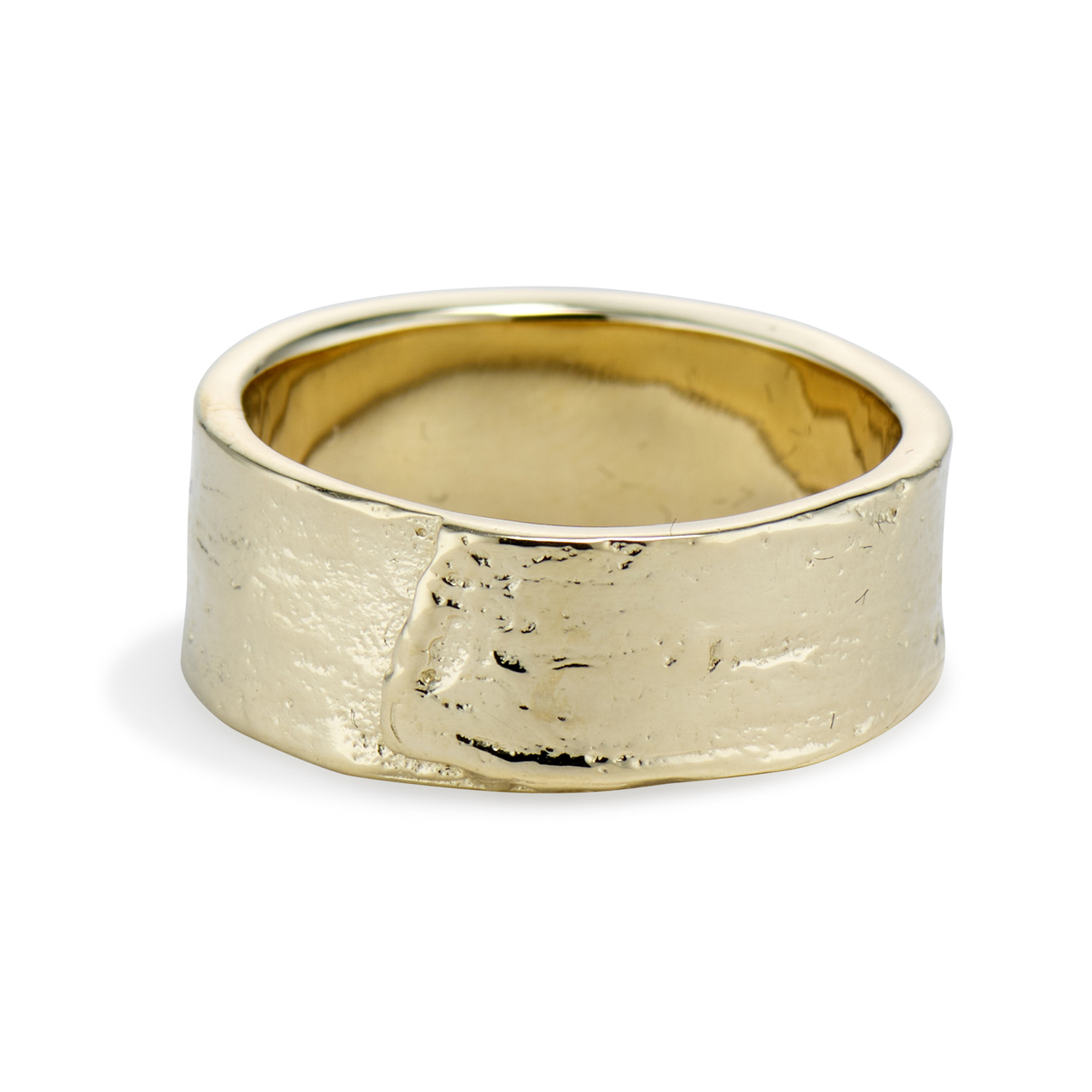 Trees maintain a special place in the Lord of the Rings series, especially for Aragorn as The White Tree of Numenor was his family's sigil of choice and an increasingly pertinent symbol of hope and renewal.

In the series, The White Tree of Numenor has been destroyed many times, yet, a seedling or twig is always salvaged for eventual replanting and life. In fact, after becoming King of Gondor and Arnor, Aragon later finds and plants a white seedling of his own.

We can imagine that Aragorn would love the Monhegan Ring. This 8 mm ring is hand cast from real white birch bark  much like the White Tree of Numenor.  Although smooth and polished on the inside, the outside reflects the natural texture of the bark. Allowing Aragorn, or your partner, to carry a little bit of tree with them no matter where they go. 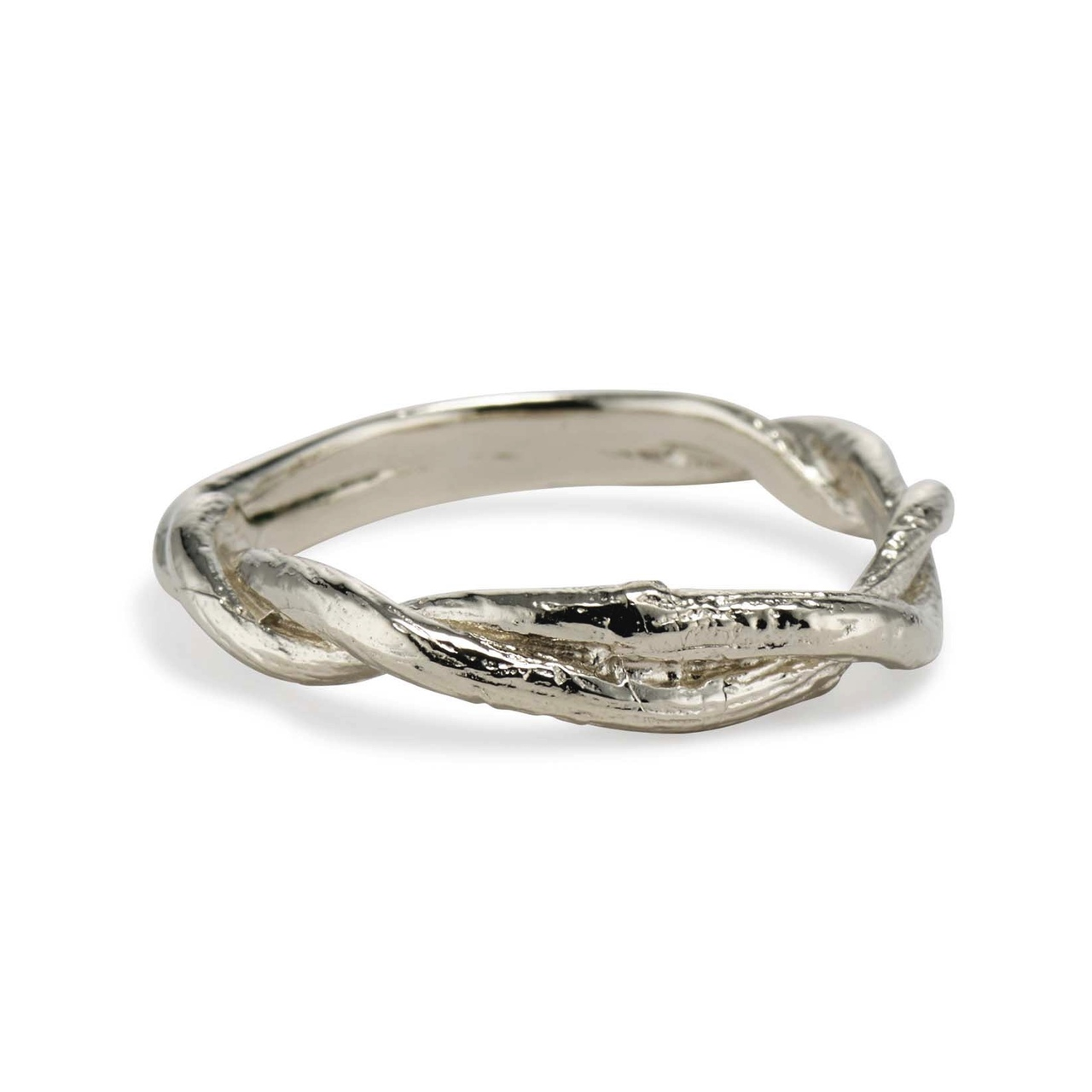 Aragorn is no stranger to rings, in fact, he is the owner of the Ring of Barahir, an ancestral ring that features the likeness of two serpents coiling around each other. As the story goes, Barahir was gifted the ring by the Elven King Finrod Felagund, after Barahir saved his life.

Regardless of whether your partner has fought with and (ultimately) saved the life of royalty, they will no doubt appreciate this ring's design: intertwining birch twigs much like those in the Ring of Barahir.

This handcrafted ring is available in solid white gold, rose gold, yellow gold, rhodium, or platinum and is perfectly smooth on the inside to ensure a comfortable and accurate fit. 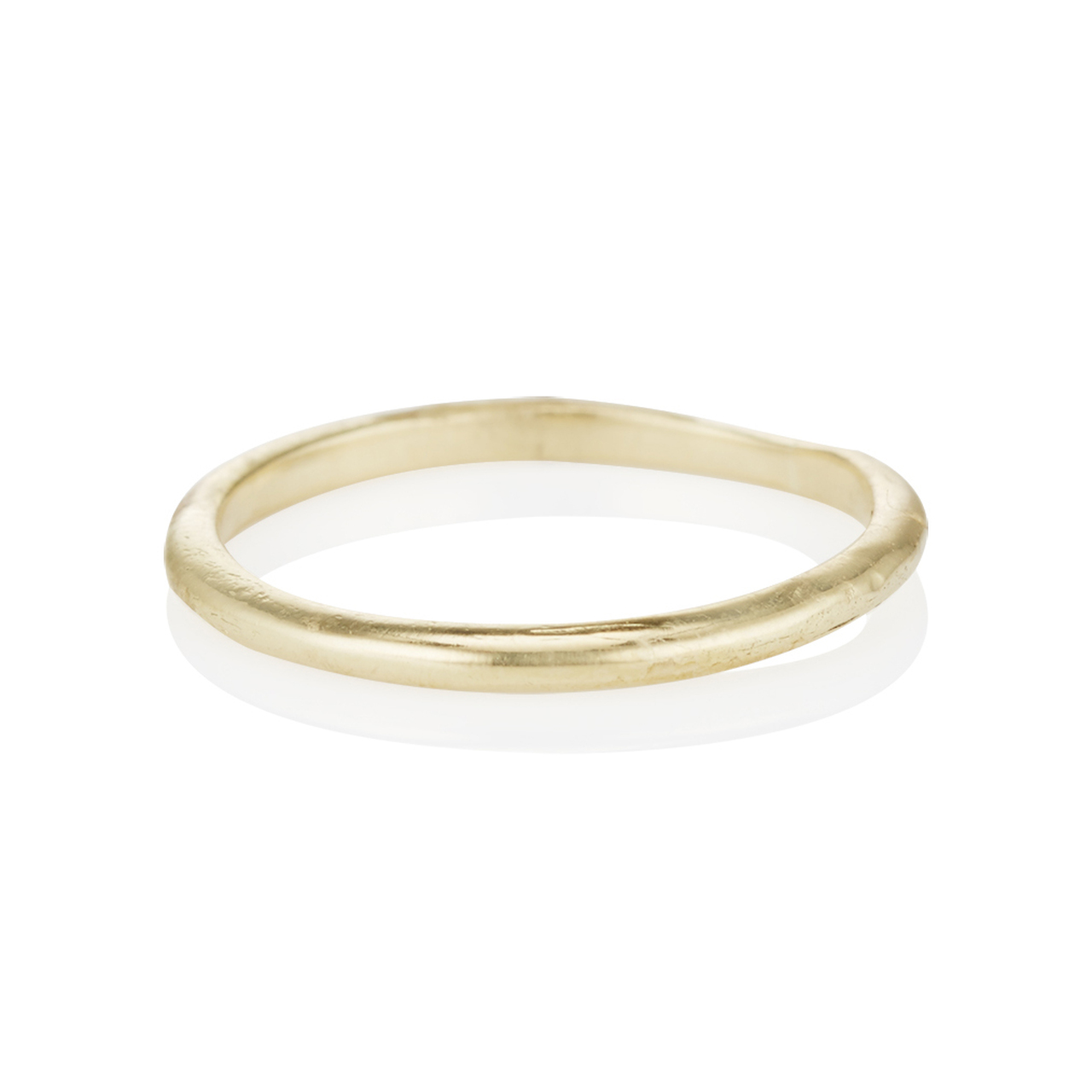 At the end of the day, Aragorn is a simple man. He requires food, water, a place to rest his head and good companionship. In fact, Aragorn is so steadfast to his friends that he is willing to risk his life for them. As he tells Frodo, “I would have gone with you into the end, into the very fires of Mordor”.

For a man with seemingly simple and refined tastes, we can imagine that Aragorn would favor the Driftwood ring. Simple yet stunning, the band was cast from real driftwood and is a durable solid gold. Its thin, 1.5mm band sits comfortably on the finger allowing the wearer to travel to the ends of the world and back without fear of it slipping, chipping, or falling into the flames of Mount Doom. 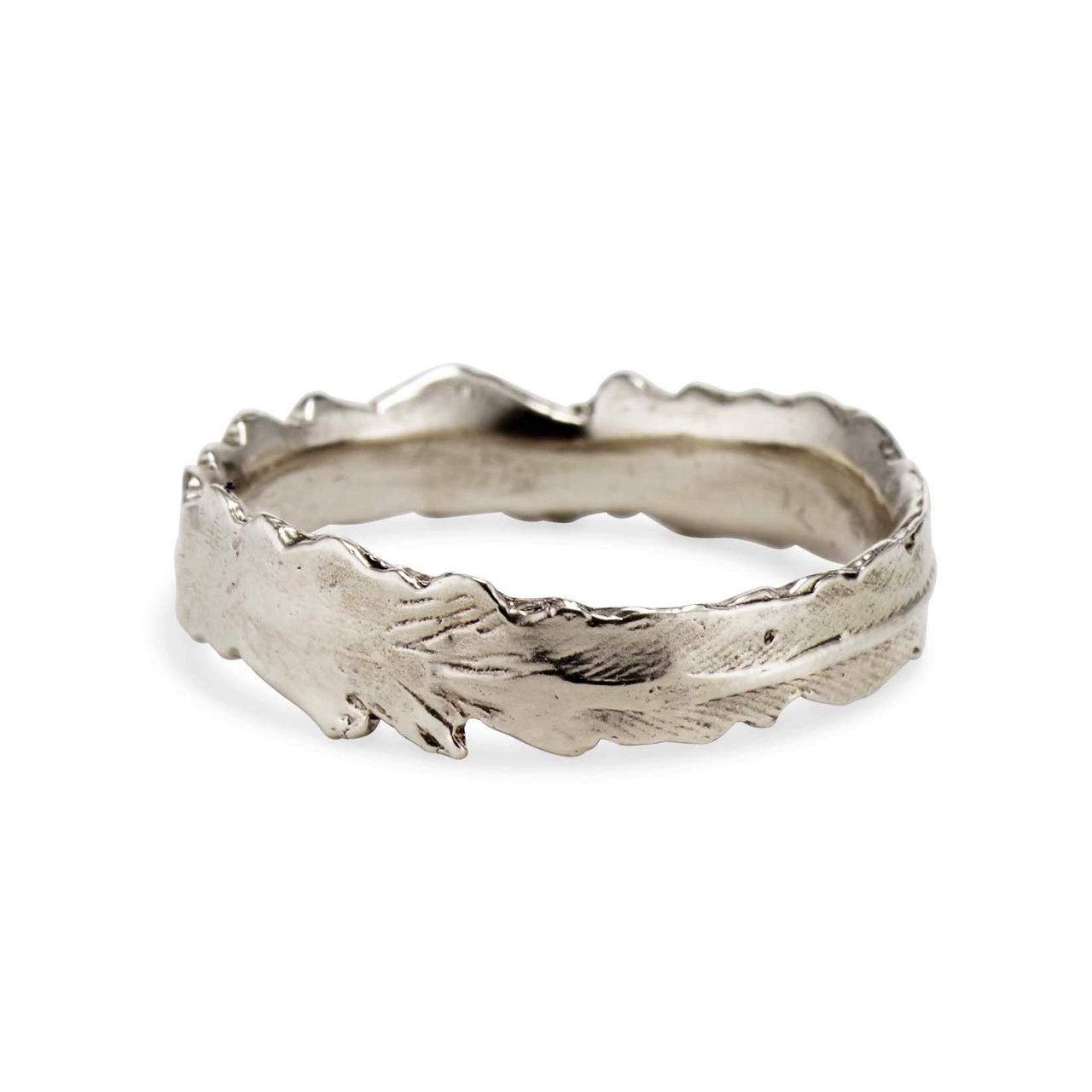 “It [the crown] was all white, and the wings on either side were wrought of pearl and silver in the likeness of the wings of a sea bird, for it was the emblem of Kings who came over the sea." So goes the description of Aragorn’s crown during his coronation.

The Plume Ring, fashioned after actual feathers and available in solid gold, palladium, and platinum, gestures toward this historic crown. The textured and highly detailed Plume Ring is rustic, chic, and truly fit for a King. 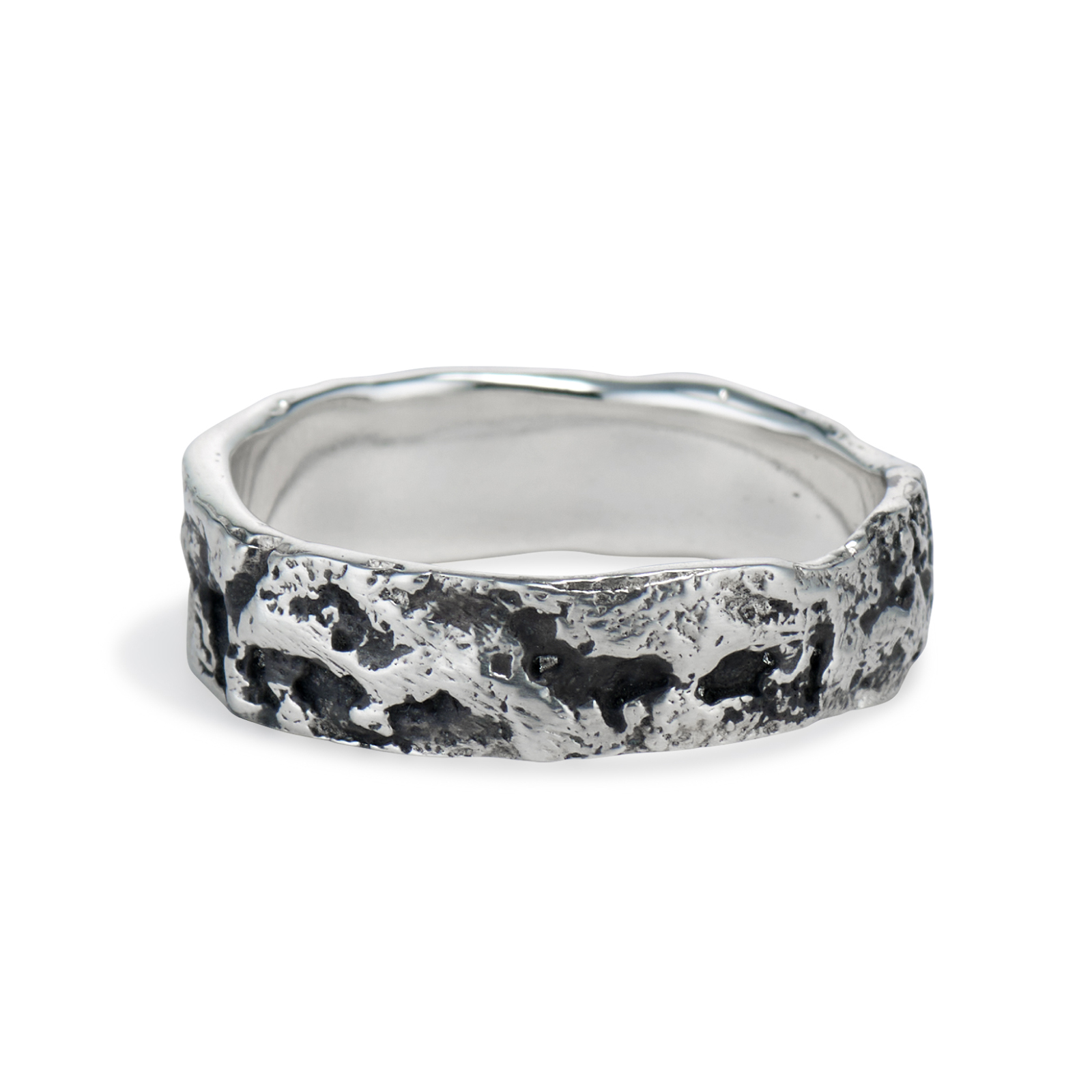 In the Lord of the Rings, the race of Men rule Middle Earth, and, before the action of the books take place, were one of Sauron’s biggest opponents. Together with the Elvish race, during the War of the Last Alliance, Isildur, Aragorn’s own ancestor, defeated Sauron.

The race of Man is viewed by other races as a little rough and tumble. Unlike the Elvish race, mankind is mortal. Thus, many other races view them as unspun and rough yet roguishly handsome and quite beautiful. The Silver Vineyard ring, perfectly alludes to those qualities of mankind.

The handcrafted solid silver, gold or platinum ring features a band that was cast  from real bark. Because of this, the individual characteristics of the bark are able to shine through. Plus, unlike the race of men, the Vineyard ring is unable to be corrupted by power. 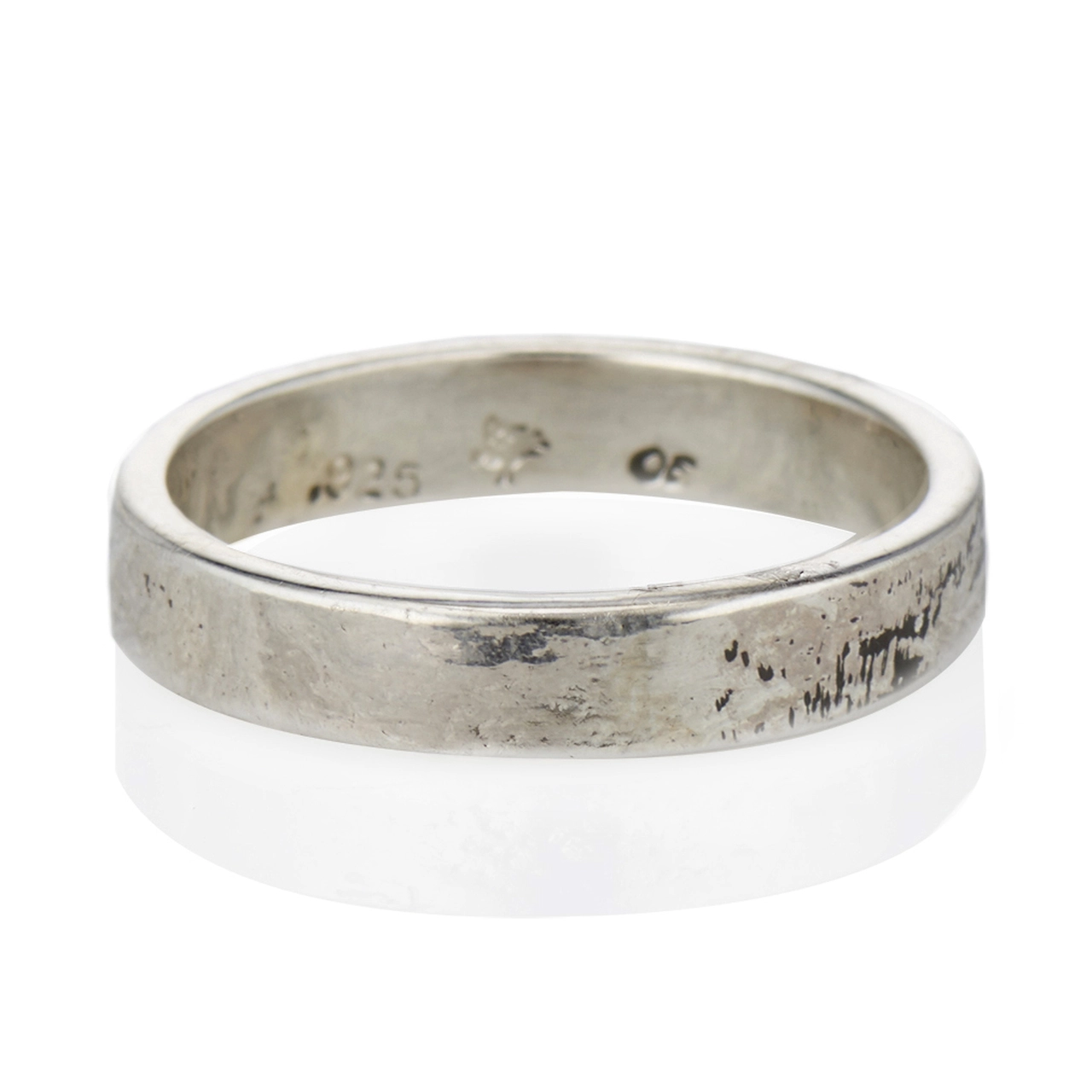 The love story between Aragorn and Arwen is truly one of the most romantic love stories we know. Aragorn falls in love with Arwen the moment he meets her. However, it takes Arwen some time to realize he’s the one for her….around 20 years in fact. It’s understandable that Arwen took her time. In deciding to commit herself to Aragorn she forsook her immortal life and all those in it.

Aragorn and Arwen both made huge sacrifices so that they could be with one another. Despite the devastating consequences of the decisions they made a perfect union.

The Silver Birch Ring reflects this duality of choice and serves as a potent reminder of all the ups and downs in a relationship. Like Aragorn and Arwen’s relationship, lightness and darkness feature heavily. Although made of silver, the Birch ring is not polished to shimmering perfection. Instead, it features a textured and shaded exterior. Through good times and bad the Silver Birch reminds you that your love is able to withstand whatever is thrown at it. 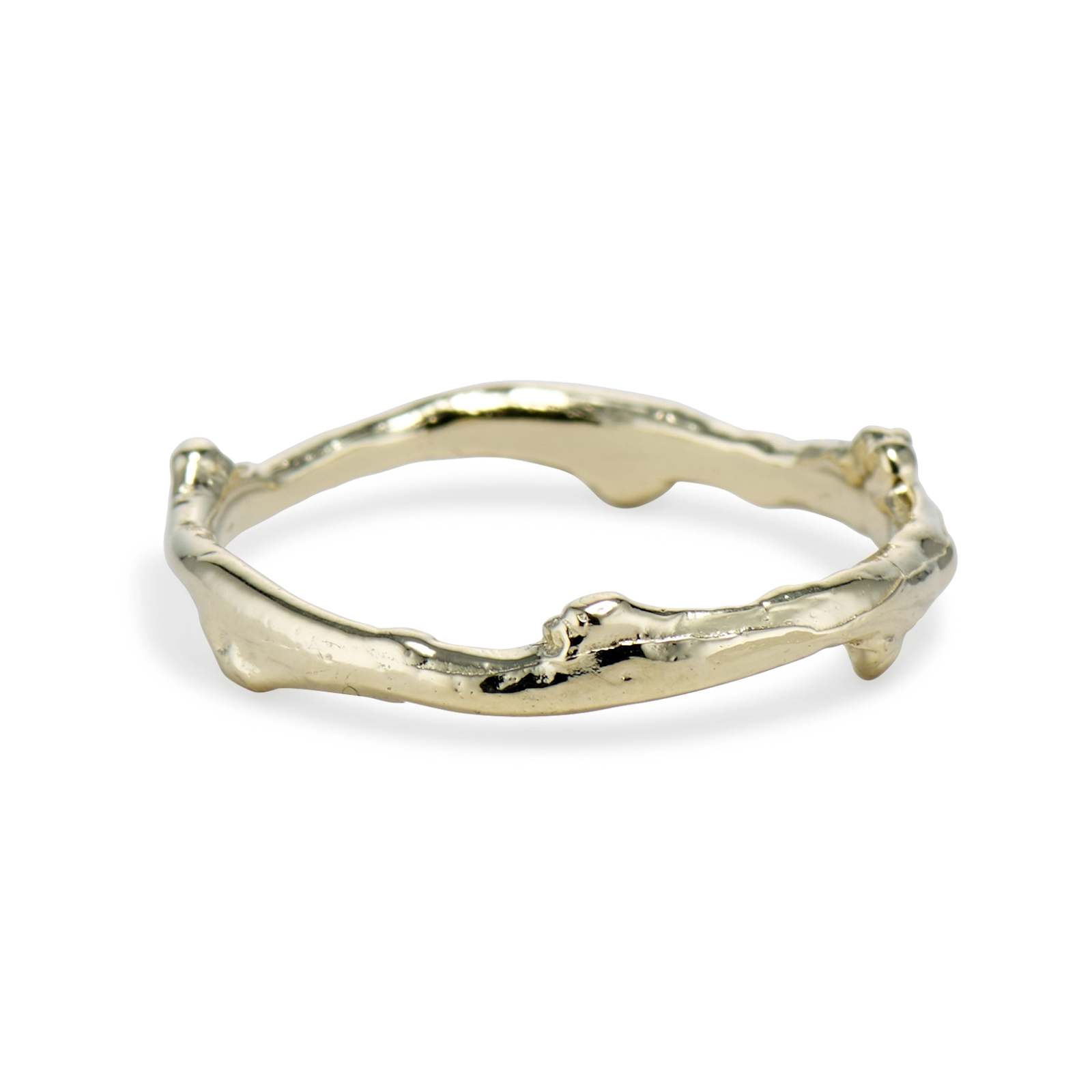 Garlands are a prominent accessory in the Lord of the Rings novels and series, Characters wear them during celebrations or as a crown. At Aragorn's coronation, those watching attended with, “garlands in their hair” and Arwen wears a silver garland during her wedding to Aragorn.

The Men’s Garland Ring is an understated yet chic way to bring some Middle-Earth pizzaz into your daily life. The Garland utilizes a creamy yellow-gold, lustrous sterling silver and white gold, luxurious platinum or palladium, and unique rose gold.

The budded detail has been meticulously cast from natural twigs to honor and uplift the original texture of foraged twigs. 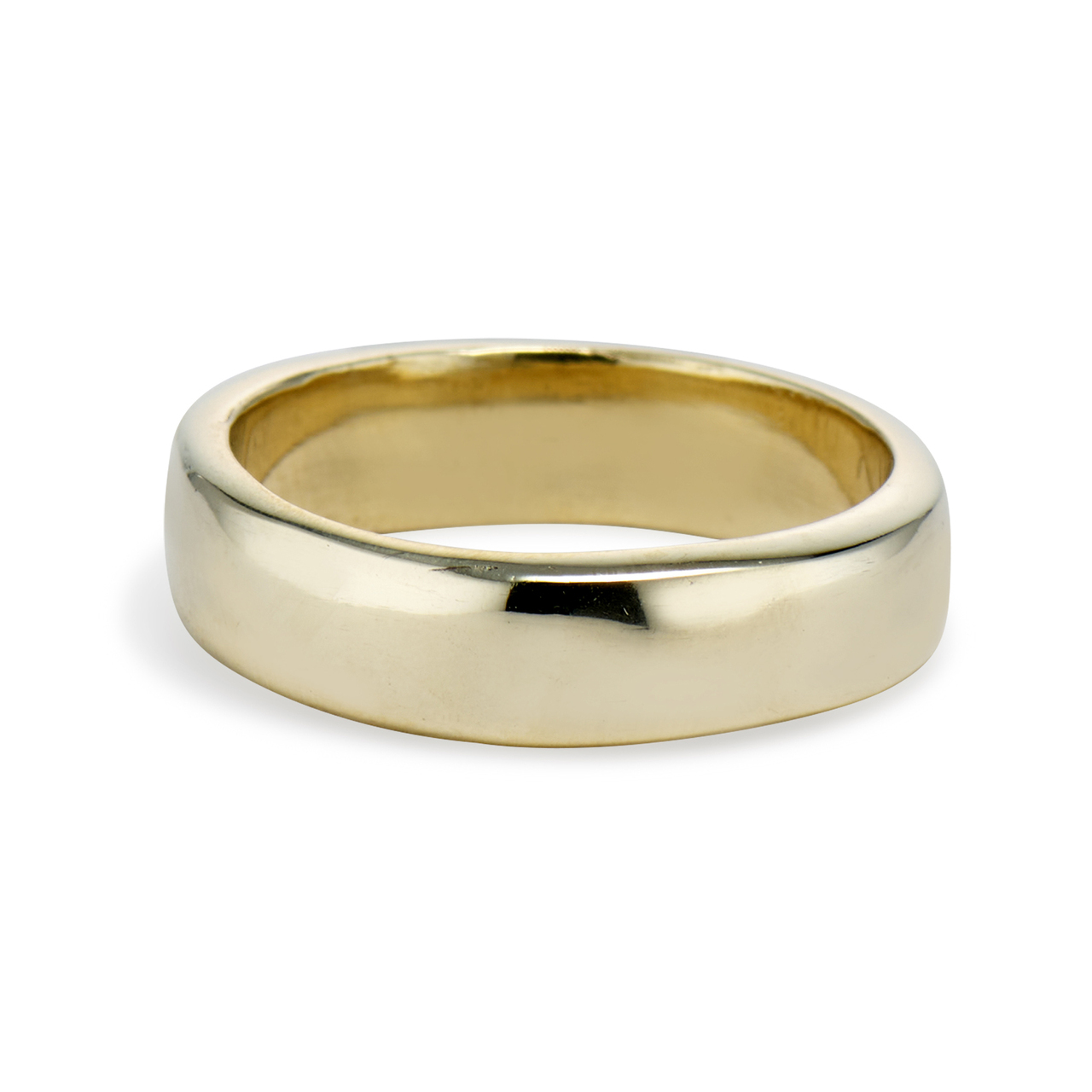 The Wells Ring may not be the “one ring to rule them all” but it will no doubt endlessly spark conversations regarding its classic design and timeless appeal. The Wells is a 5mm squared design with slightly rounded edges to ensure maximum comfortability and a perfect fit.

Forged by hand, but sadly not in the fires of Mount Doom, each Wells ring is molded and polished to feature natural and slight imperfections, ensuring that every ring is unique to its owner.

Time and time again, Aragorn has proven his valor in his commitments to his friends, his strength in character, and his loyalty to the cause of freedom. And while we’re positive that Aragorn is the best man in Middle Earth, he simply can’t hold a candle to your partner.

When you purchase an Engagement or Wedding band from Olivia Ewing Jewelry to gift your partner you are telling them that you “would rather spend one lifetime with them than face all of the ages of the world alone”.