WHAT IS THE SIGNIFICANCE OF THE EMERALD BIRTHSTONE?

WHAT DOES YOUR EMERALD BIRTHSTONE MEAN?

The emerald, known to be the birthstone of May, is one of the most popular and revered gemstones in history. And for good reason too. Not only is it beautiful to look at but it has a variety of special meanings and longstanding associations that make it a wonderful and meaningful gem to get your hands on. Want to know why emerald is so beloved? Read on to find out!

The emerald has a storied history dating back millions of years with some estimating that the oldest emeralds are around 2.97 billion (yep, with a B) years old. With that in mind, it may be helpful to keep in mind what distinguishes an emerald from any other stone. 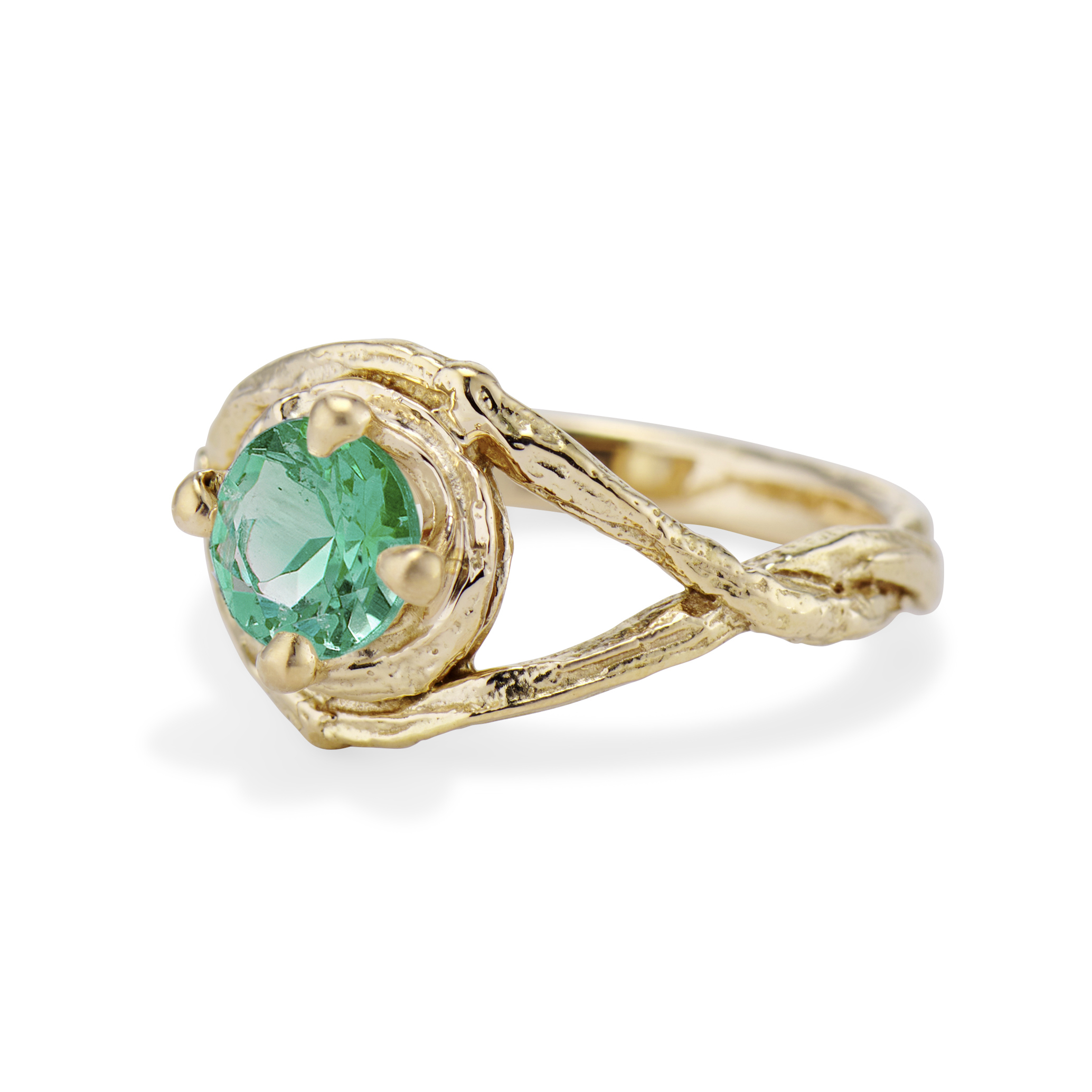 
While an emerald is similar to other stones, it's in a class all its own. Emeralds are members of the beryl family, they are cousins to the gemstones morganite, aquamarine, and heliodor and are also related to chrysoberyl and tourmaline, which are sometimes called "emerald-like," though they don't have the same chemical make-up. What sets the emerald apart from other beryl stones is its vibrant, deep, green color. This green color is developed when mineral impurities are present in pure (or, clear) beryl. In the case of the emerald, the impurities from chromium and vanadium (sometimes iron) are needed to provide the Emerald city green we've come to know and love.

Emeralds are formed thanks to deep hydrothermal veins otherwise known as mineral deposits within fractured rocks. Essentially, emeralds develop after hot and pressurized fluid containing the elements needed to make emeralds (usually chromium and vanadium) escape magma from deep within the earth's crust to settle and cool within hydrothermal veins. Once cooled, this fluid crystallizes, and soon after millions of years, voila! Emeralds!

One of the defining features of an emerald is its inclusions. As mentioned above, the formation of emeralds can be a chaotic process and the resulting inclusions are an accepted and loved characteristic of the emerald. Inclusions occur when materials find themselves trapped within the emerald during its formation. Inclusions include fissures, cavities and chips, growth tubes, spirals, fingerprints, and color zoning. While too many inclusions are known to affect the clarity grade of an emerald, some inclusions are considered completely normal. In fact, if you ever come across an emerald with no inclusions, there is a very high possibility that it is actually fake!

WHERE ARE EMERALDS FOUND?

Most emeralds come from the Andean mountain range in South America, specifically in Colombia and Brazil. Colombia produces more than 50% of the world's emeralds, and their gems are considered to be of the highest quality. In fact, when you hear someone say "Colombian emerald," they're not referring to a specific type of emerald—they're talking about an emerald that was mined in Colombia!

Other than South America, emeralds are found in South Central Africa (Zambia, Zimbabwe, South Africa), Pakistan (Balochistan or North-West Frontier Province), India (Kashmir, Maharashtra, Karnataka and Andhra Pradesh), Australia (Western Australia, New South Wales), Russia (Sakha [Yakutia] Republic and Siberia), and even the US (North Carolina and Montana). In Montana, you can actually mine for emeralds at the Emerald Hollow Mine and purchase enriched soil buckets to increase your chances of finding gems...road trip anyone? 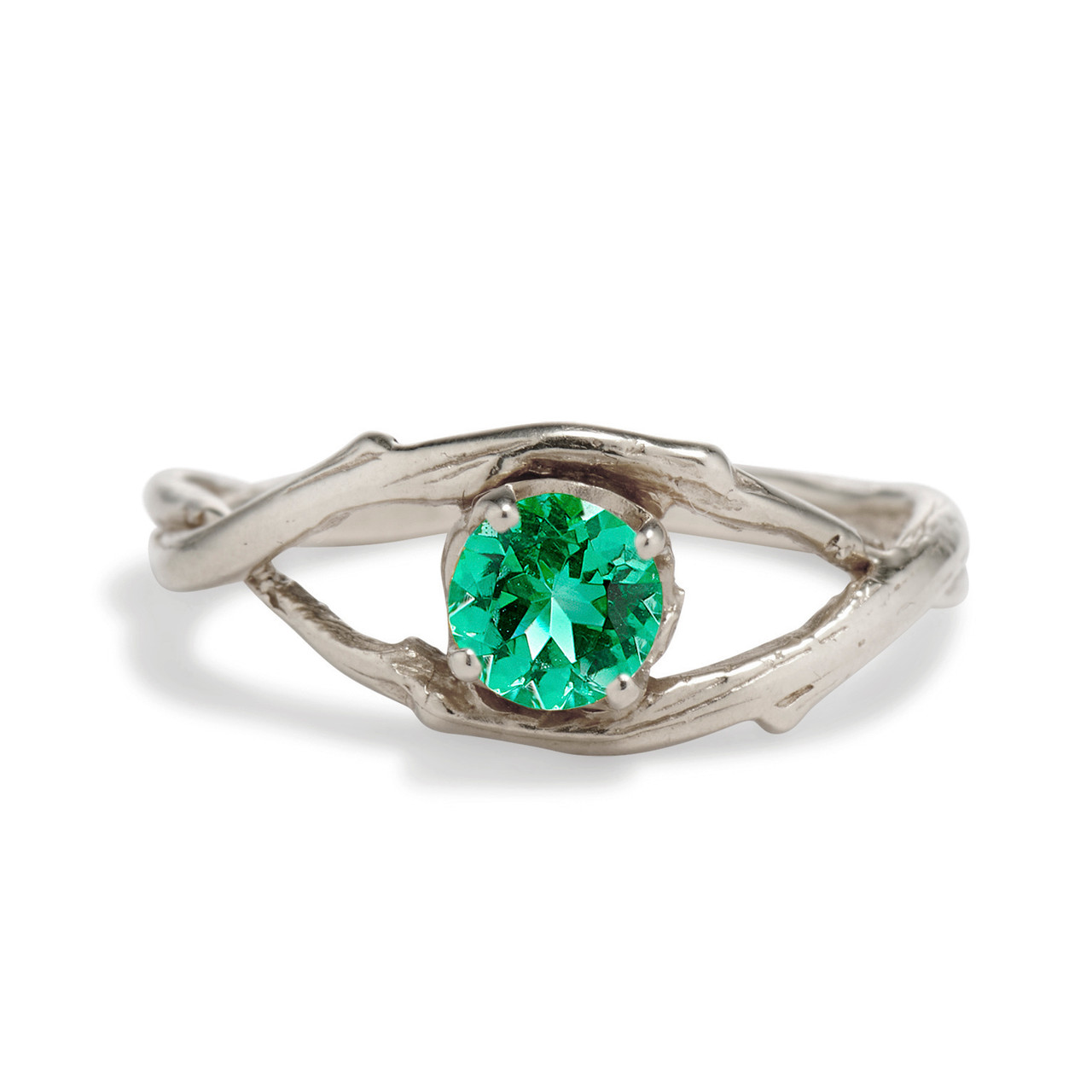 EMERALD GEMSTONES IN THE ANCIENT WORLD

Much like sapphires, emeralds were treasured in the ancient world. Many different people, cultures, and cities had their own mythology, beliefs, and appreciation for the gem. We break a few of these Ancient communities down below.

THE EMERALD GEM IN ANCIENT EGYPT

The emerald gem was one of the most popular gems in Ancient Egypt. In fact, the first evidence of mining emeralds comes from Egypt where emeralds were mined intermittently from around 500 BCE. The most famous Egyptian mine, Cleopatra's Mine, also known as Mons Smaragdus, was frequently mined by Pharoes as they passed through so they could hand out emeralds as they saw fit.

Cleopatra was well-known to be a fervent admirer of the green-hued gem so much so that she was known for gifting foreign dignitaries, "a large representation of herself, carved entirely out of emeralds".

Cleopatra may have helped emeralds gain widespread appeal but they were already very much appreciated in Ancient Egypt. Egyptians believed that emeralds represented rebirth, fertility, and eternal youth. Oftentimes being used in burial rituals as a reminder of youth. Emeralds were also used medicinally as a treatment for eye diseases and believed to help invoke clairvoyance.

EMERALDS IN ANCIENT GREECE AND ROME

The name emerald comes from the Greek word for green, smaragdos which was later translated into the Latin esmaralda. The emerald was prized for its beauty and was attributed to the Greek goddess of love, Aphrodite. At the time it was common to gift an emerald for a loved one to wear as a token of your love and ability to gauge the faithfulness of your lover. It was said that if the wearer's emerald was ever to lose its color then the wearer was indeed unfaithful.

The Greek philosopher, Aristotle, provides some of the earliest writings about the emerald. In his writings, he detailed how emeralds could be used to help win battles, increase the wearer's importance in business and speeches, settle litigation, soothe eyesight, and even help prevent epilepsy.

In ancient Rome, emeralds were used by healers to help treat many ailments, ranging from eye conditions to infertility. Romans believed that the color of the emerald was apt to change according to the wearer's immaturity. The more immature the person, the paler the emerald.

Like the Greeks, the emerald was attributed to the god of love, Venus. As the poet, Pliny the Elder wrote regarding emeralds in his text, Natural History, “no color is more delightful in appearance. For although we enjoy looking at plants and leaves, we regard Emeralds with all the more pleasure because compared with them there is nothing that is more intensely green”. 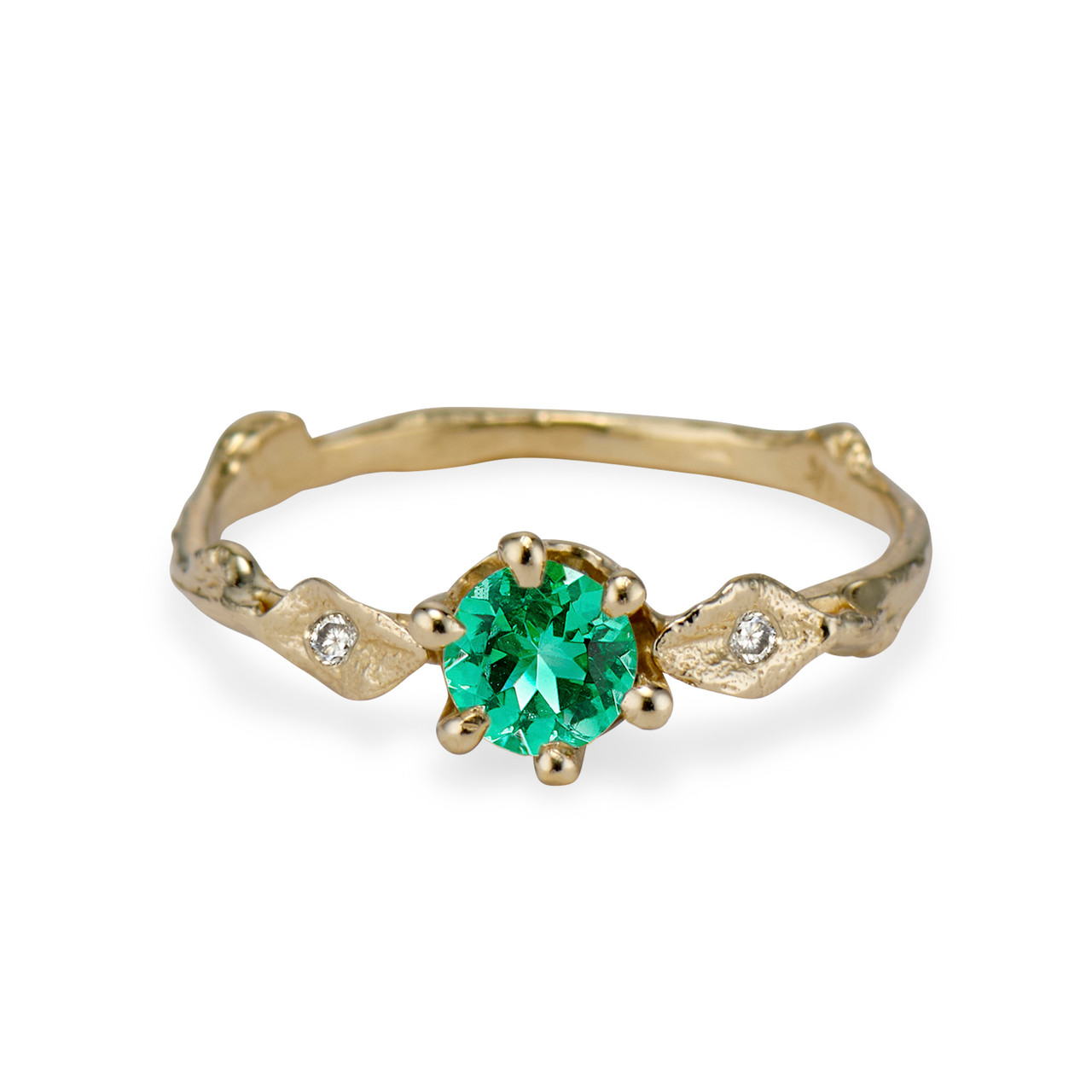 The Incas believed that the emerald symbolized the tears of the moon goddess, Mama Killa, and had been using emeralds in their religious ceremonies 500 years before they were invaded by Spanish colonizers.

The emerald was seen as the gem of Incan royalty and was usually mined for religious ceremonies during the rainy season to take advantage of plentiful water resources. It is said that only local Chibchas (a tribe in Columbia that assimilated into the Incan Empire) were permitted to dig for emeralds. If an outsider were to attempt to dig, they would die within a moon.

THE MAY BIRTHSTONE IN THE MYAN AND AZTEC EMPIRES

The Myan's believed that the emerald stone when worn was highly protective and viewed the gem as a holy stone.

The Aztecs, however, were perhaps most enthusiastic about the stone's potency. They associated the emerald with Quetzalcoatl—the god of life and wind—and considered it a gift from him. If not, the cause of his conception- after his mother, Chimalman, swallowed an emerald.

The emerald's meaning and capabilities have varied a lot throughout the years. But what does it symbolize today and are there ongoing spiritual beliefs that prescribe powers to the emerald? Depends who you ask. While some people will tell you that the emerald's ability to provide clarity and heal eyesight is the placebo effect in action, others will swear by it. For the most part, emeralds are generally identified as providing the following benefits in modern-day applications... 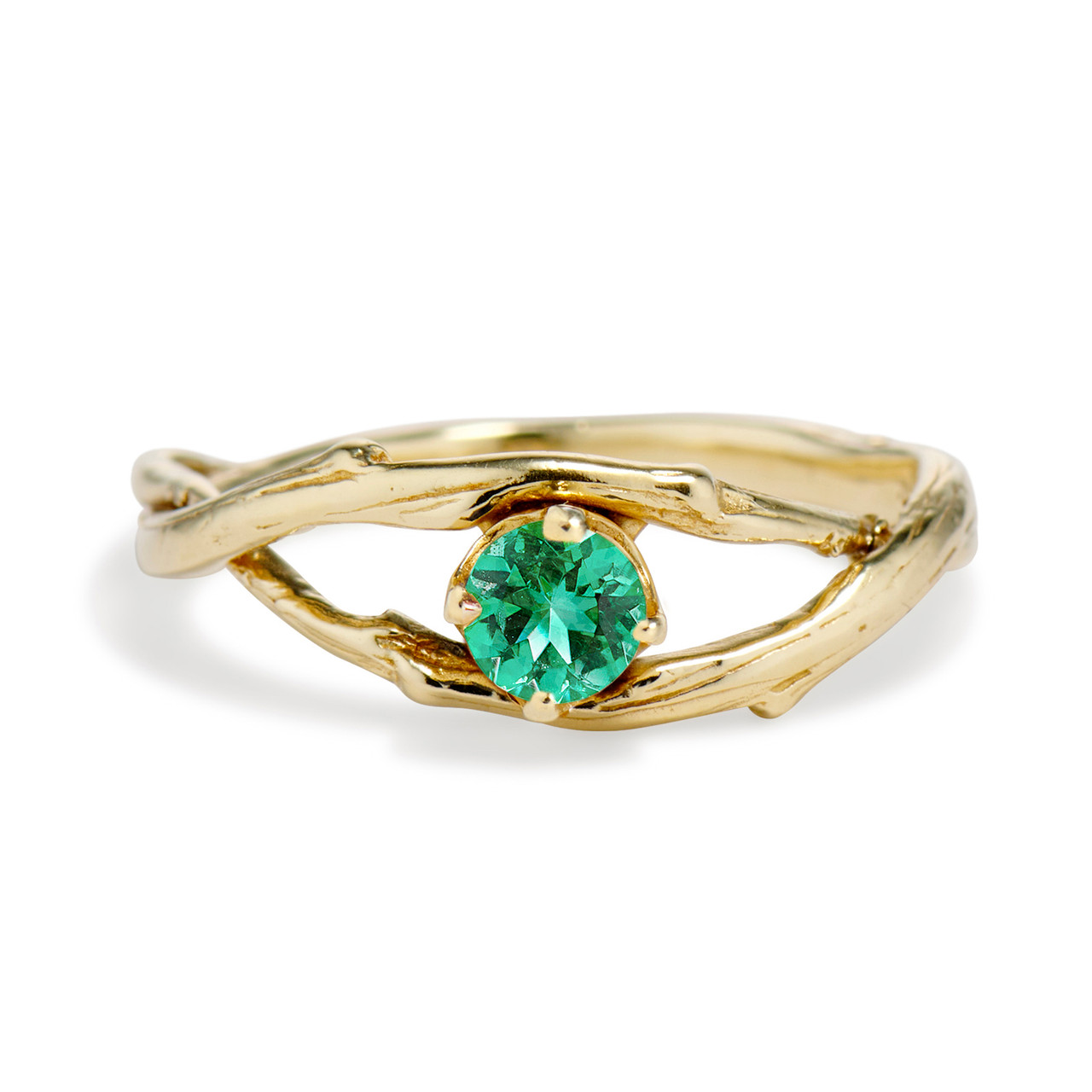 Depression and anxiety are no match for this green gemstone. Metaphysicicists regularly tout the power of emerald to calm intense emotions. Perhaps this is harkening back to ancient cultures that believed that the emerald could ease and soothe strained eyes. If eyes, why not spirit or emotions?

In modern times, the emerald is viewed as a stone that will bring love and relationship luck. The emerald corresponds to the heart chakra and can increase compassion while supporting already strong friendships. As a "stone of the heart," it is known to symbolize mercy, compassion, and, universal love.

In the Kewa tribe of New Mexico, which is part of the Pueblo culture, tribal members believe that emeralds have healing properties. The gems have been used to cure ailments such as headaches and eye issues, as well as to bless new tools or projects.

WEAR AN EMERALD, SEE THE FUTURE?

Anyone who's born in May is considered to be lucky, but emeralds take that luck to another level. One legend claims that owning an emerald will help you discover the secrets of the universe, while another says that wearing one will protect you from evil and give you the ability to foresee the future.

The emerald's deep green is also commonly accepted as a tool to receive more green in your life - money, that is. As the Times of India states, "[The emerald] resonates with money and cash and hence is known as abundance crystal. It enhances your thinking process helping you to make the right decisions when it comes to property dealings".

May babies with emerald birthstones are born under the sun sign of Taurus and Cancer. Because of this, those with the emerald birthstone are known to be grounded, caring individuals, who enjoy their creature comforts and are, at times, quite stubborn.

Much like the Greek and Roman gods, Venus and Aphrodite, that the ancients subscribed the emerald to, emerald babies are known to be quite sensual and to value love - desiring monogamous commitment and deep and true partnership. 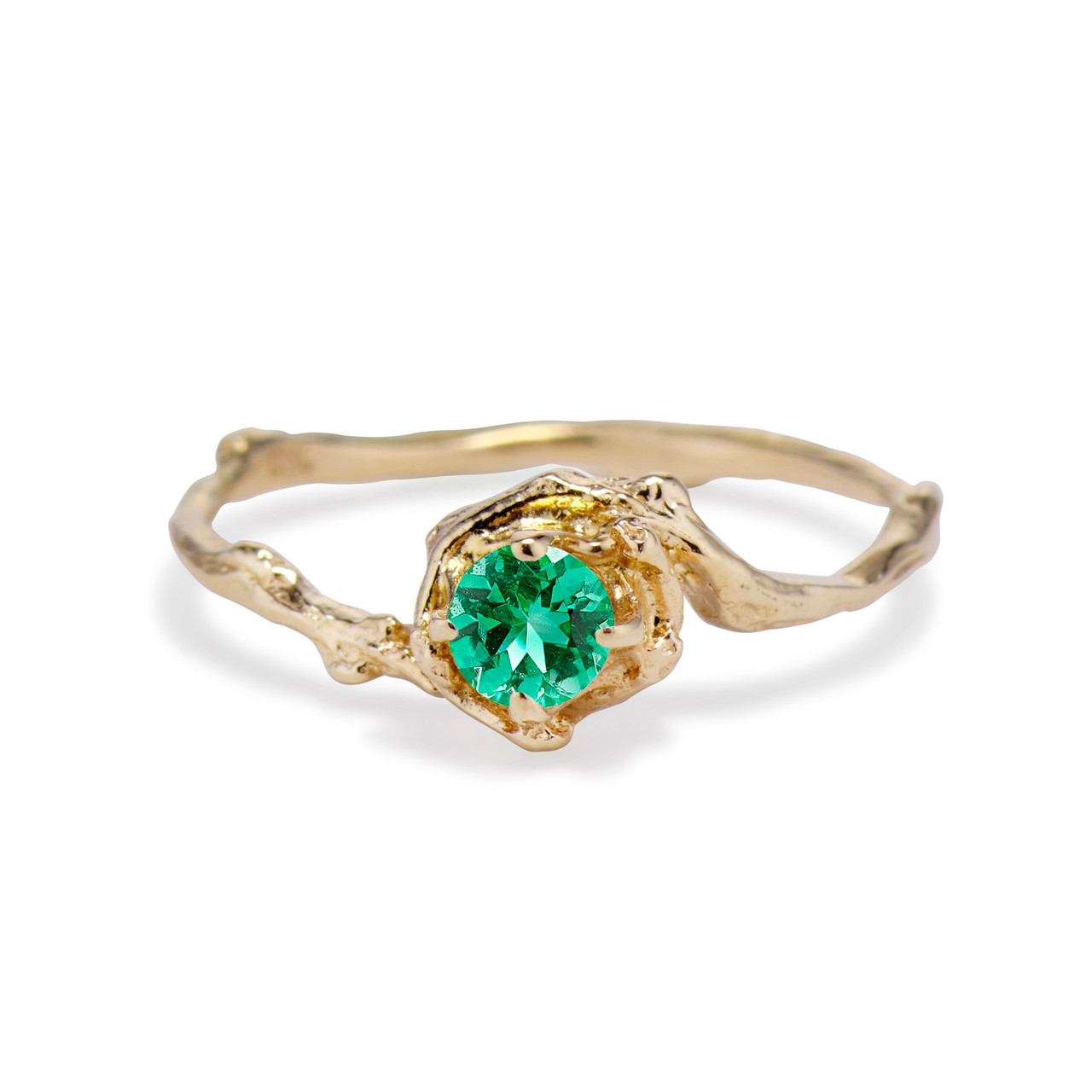 HOW TO CHOOSE AN EMERALD

Emeralds, like the diamond and other gemstones, can be judged according to the four Cs: color, cut, clarity, and carat weight. The most important aspect when buying an emerald is to focus on color. Is the color evenly distributed and not too dark? Clarity is usually considered one of the least important 4cs. Most emeralds will have natural marks and inclusions. As mentioned before, if the emerald has none, it may not even be an emerald.

Short of cut and style of emerald, another important consideration to keep in mind is its sustainability and environmental impact. Although not as bad as diamond mining, emerald mines can still be environmentally damaging and contribute to the destruction of natural ecosystems at the expense of animals and people alike.

Not all jewelers are alike and at Olivia Ewing Jewelry we pride ourselves on being different. At Olivia Ewing Jewelry all of our gems are ethically sourced by reusing and recycling gemstones and sourcing from responsible and ethical miners. On top of that, our metal is sustainable as well! By sourcing sustainable materials we minimize our effect on climate change and you get a beautiful emerald ring. It's a win-win.

GET WHAT YOU (OR YOUR GIFTEE) LIKES

At the end of the day, you can travel the world over to find the perfect emerald birthstone. From Egypt to Columbia to the aptly named Emerald Isles, however, none of that matters if you don't buy the emerald that speaks to your heart. If you stay true to yourself (or your partner) you'll never go wrong. Looking for more information about gemstones? You're in the right spot.

WANT TO START YOUR EMERALD JOURNEY? CHECK OUT OUR EMERALDS TODAY!