TRULY A DIAMOND IN THE ROUGH

In one of the titular scene’s from Disney’s Aladdin the magical Cave of Wonders, a talking cave assuming the shape of a tiger’s head, announces, “Know this. Only one may enter here. One who lies far within. The Diamond in the Rough”. Later in the film, after the ‘Diamond in the Rough’ aka Aladdin, has entered, we discover that the Cave of Wonders is the home to not just the magical flying carpet but the Genie as well….wondrous indeed!

For many of us, hearing the Cave speak on the ‘Diamond in the Rough’ was our first introduction to rough-cut diamonds. Here, a rough diamond is a person. Aladdin is an unassuming commoner, one could see him and think that he is nothing special. Upon closer examination, however, his true qualities shine through and we see that he is very much a diamond; unique, special, and full of wonders himself. 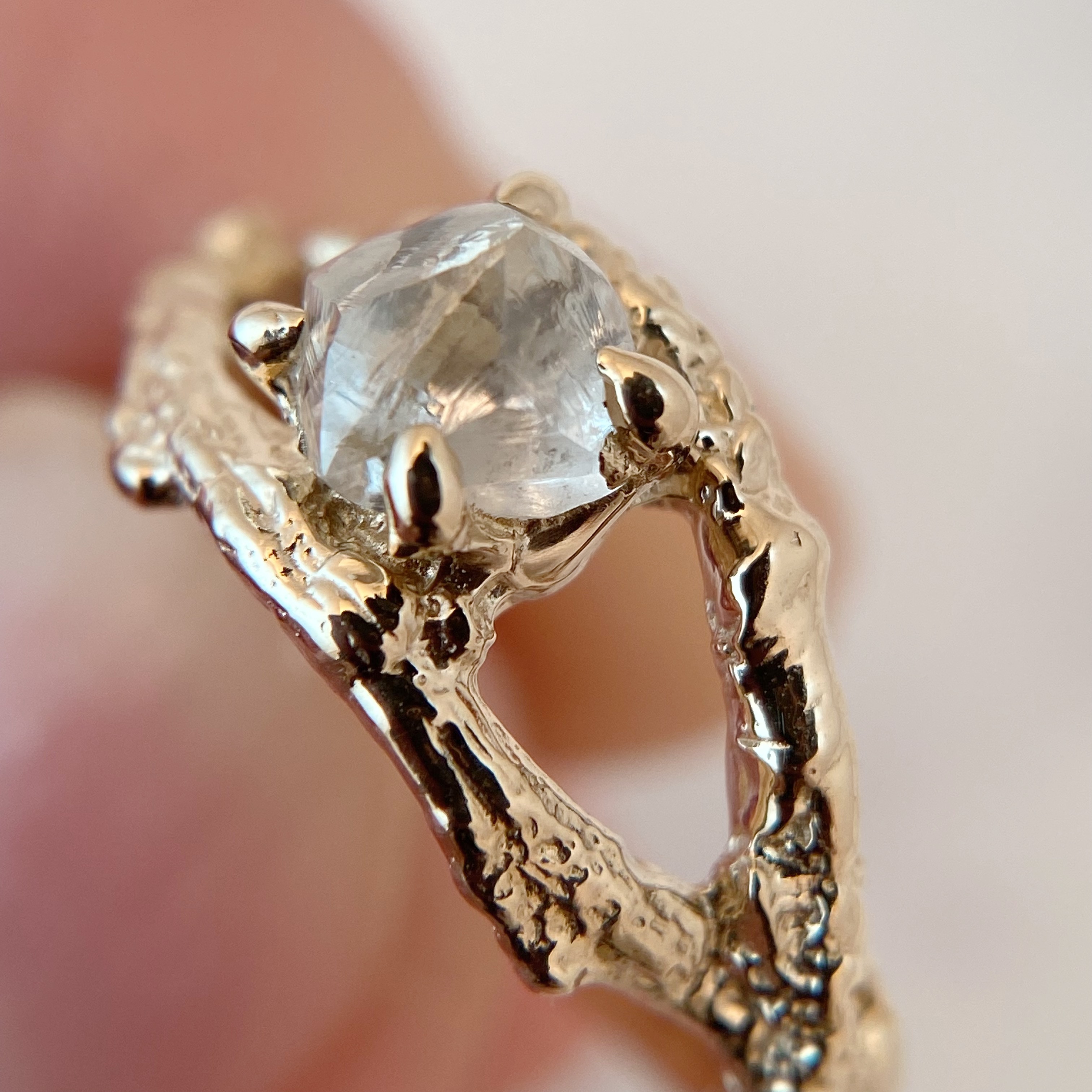 WHAT IS A ROUGH DIAMOND?

Rough diamonds, also known as raw diamonds, raw uncut / rough uncut diamonds, or diamonds in the rough, are mined or lab-grown diamonds that have yet to be cut and polished.

A rough diamond is a diamond in its most natural form. Rough diamonds are created in a crucible of heat and pressure, deep within the earth’s mantle, when temperatures are greater than 2100℉ and the pressure is 45,000 times greater than that at sea level.

Once formed, diamonds are carried to the lithosphere by vertical rock formations called kimberlite pipes where they are then mined primarily through open-pit mining. Open-pit mining utilizes heavy machinery to dig deep into the surface of the earth to access diamonds within the kimberlite pipes. This practice, while having been used since the mid-16th century, can be quite harmful to the environment due to entire ecosystems being cleared out to make room for pits, toxic dust being released from deep within the earth and various other systems that compromise the environment. Additionally, diamond mining has been known to utilize unethical practices at the expense of the people mining (the resulting diamonds from such unethical mining are called blood diamonds).

Because of the often harmful and unethical practices of the mining industry, it is important to do your research and think critically when shopping for a rough diamond. When possible, consider buying ethically sourced or recycled diamonds, like those at Olivia Ewing Jewelry. At Olivia Ewing Jewelry we create organic, nature-inspired fine jewelry, from high-quality and sustainable materials while working with reputable and trusted gemstone suppliers. The result? A beautiful, handcrafted, piece of jewelry that has been ethically sourced at no harm to the environment or diamond worker. A win-win! 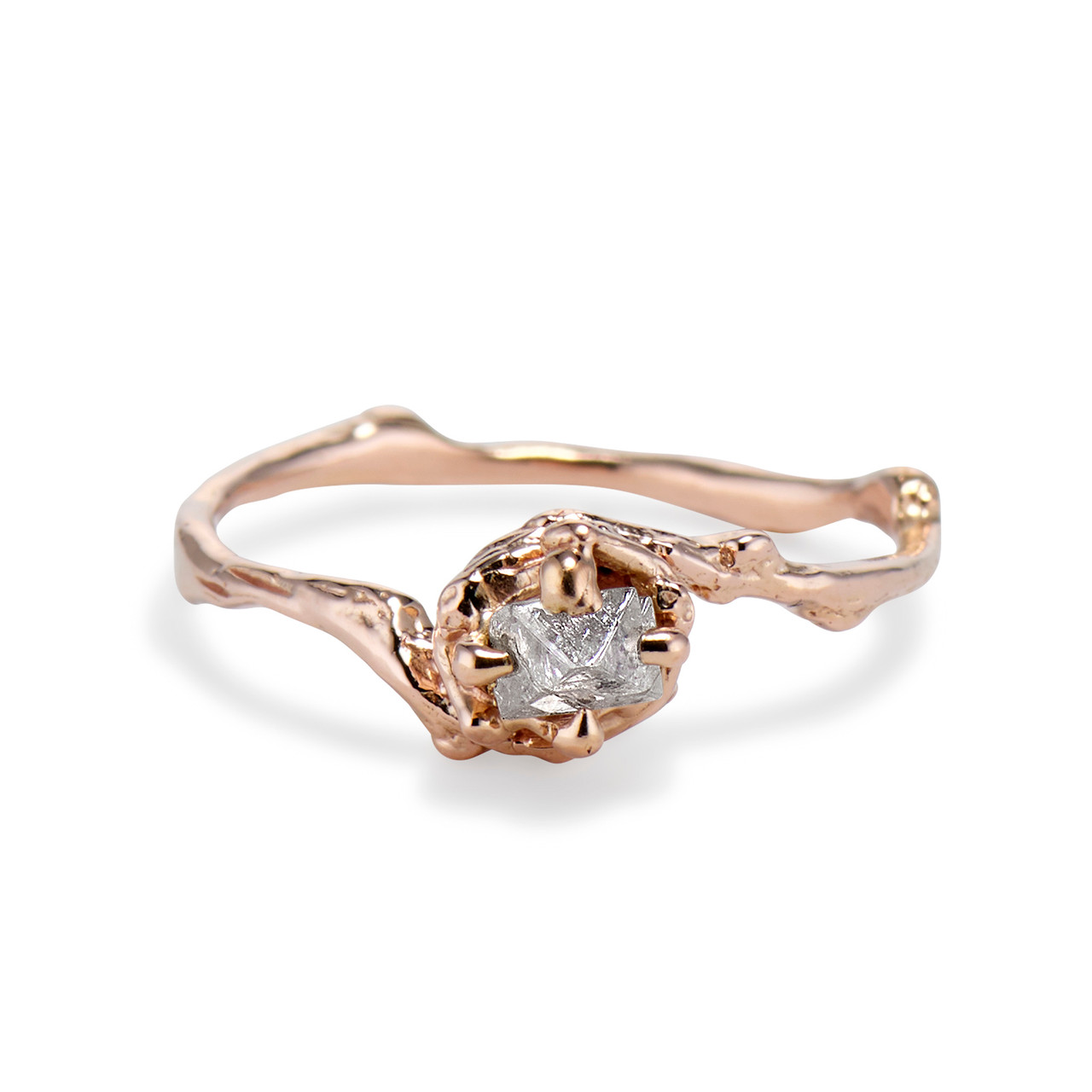 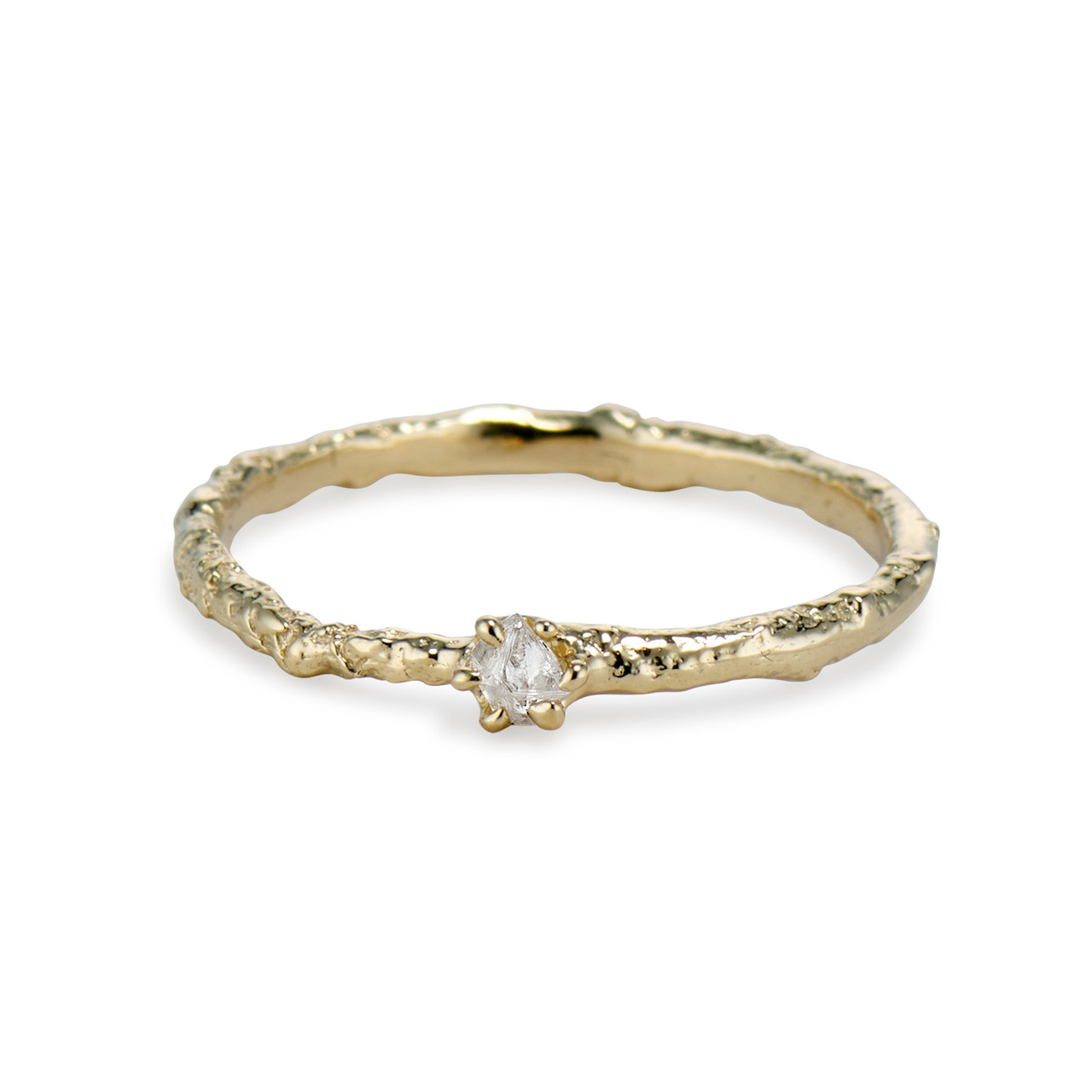 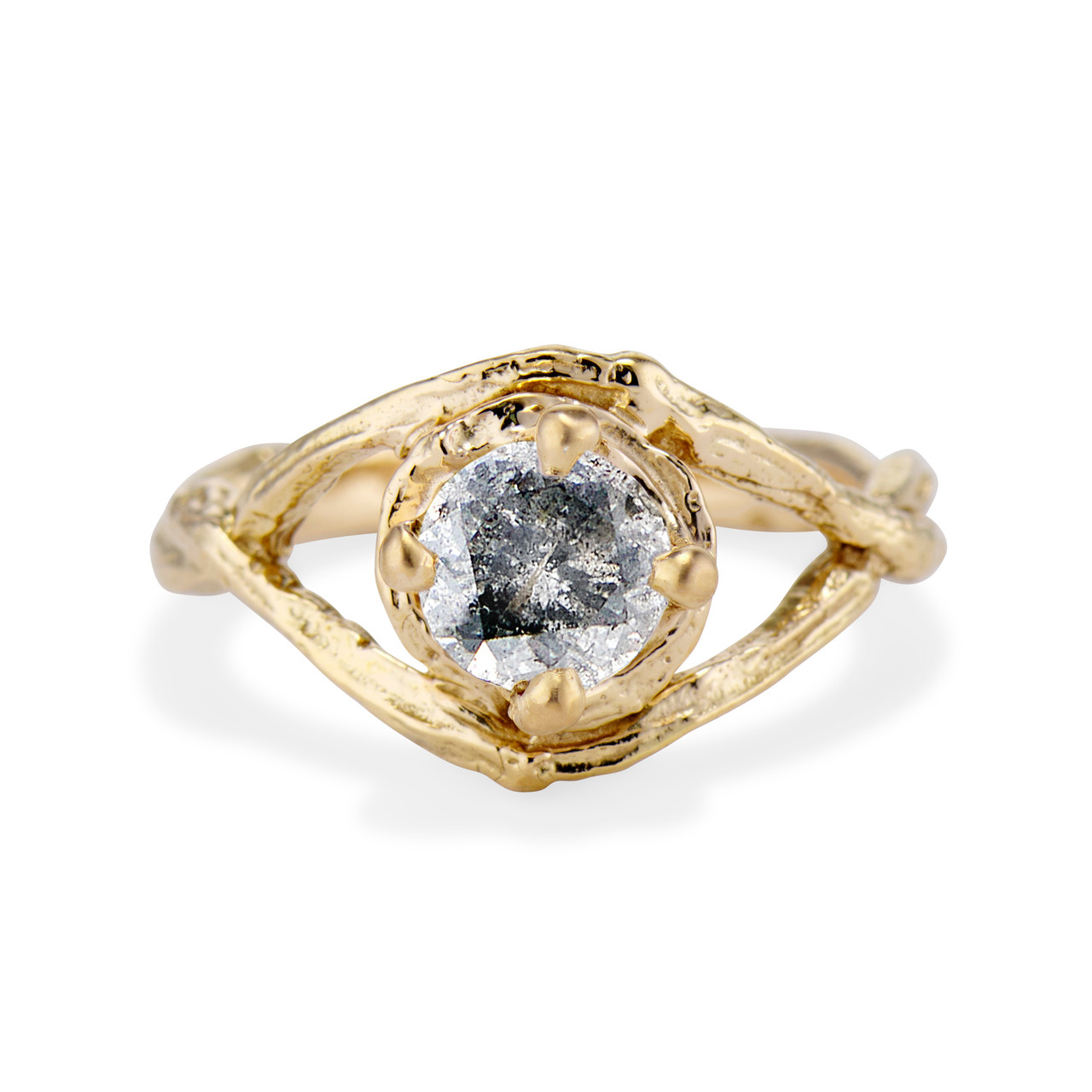 ARE ROUGH DIAMONDS ANY DIFFERENT THAN POLISHED DIAMONDS?

All polished diamonds were once rough diamonds. Rough diamonds are simply diamond gemstones that have not yet been cut and polished and are in their most natural form.

Due to their uncut state, rough diamonds are generally considered to be ‘more natural’ diamonds. Don’t be confused by this vernacular though, both rough diamonds and polished diamonds are completely natural (even when made in a lab!). Rough diamonds simply resemble what they looked like when they were first created in the earth or lab, hence ‘natural’.

HOW ARE ROUGH DIAMONDS GRADED?

As mentioned above because rough diamonds are the same thing as polished diamonds and are simply not, well, polished, they are also graded on the 4C’s to determine their value. However, the grading does differ slightly when assessing a rough diamond.

A diamond’s carat is the measurement of mass with one carat equal to about 0.2 grams. In general, the bigger the diamond the bigger the value however, size doesn’t always matter. The other aspects of grading: color, clarity, and cut, also determine the overall value, and if it is determined that one of the four c’s could be improved the value will come down.

Generally, the price per carat increases as you increase in total carats. A 1-carat stone will be worth more than two 0.5-carat stones of equal quality.

Rough diamonds are measured and then sorted into the corresponding size bracket which could be: 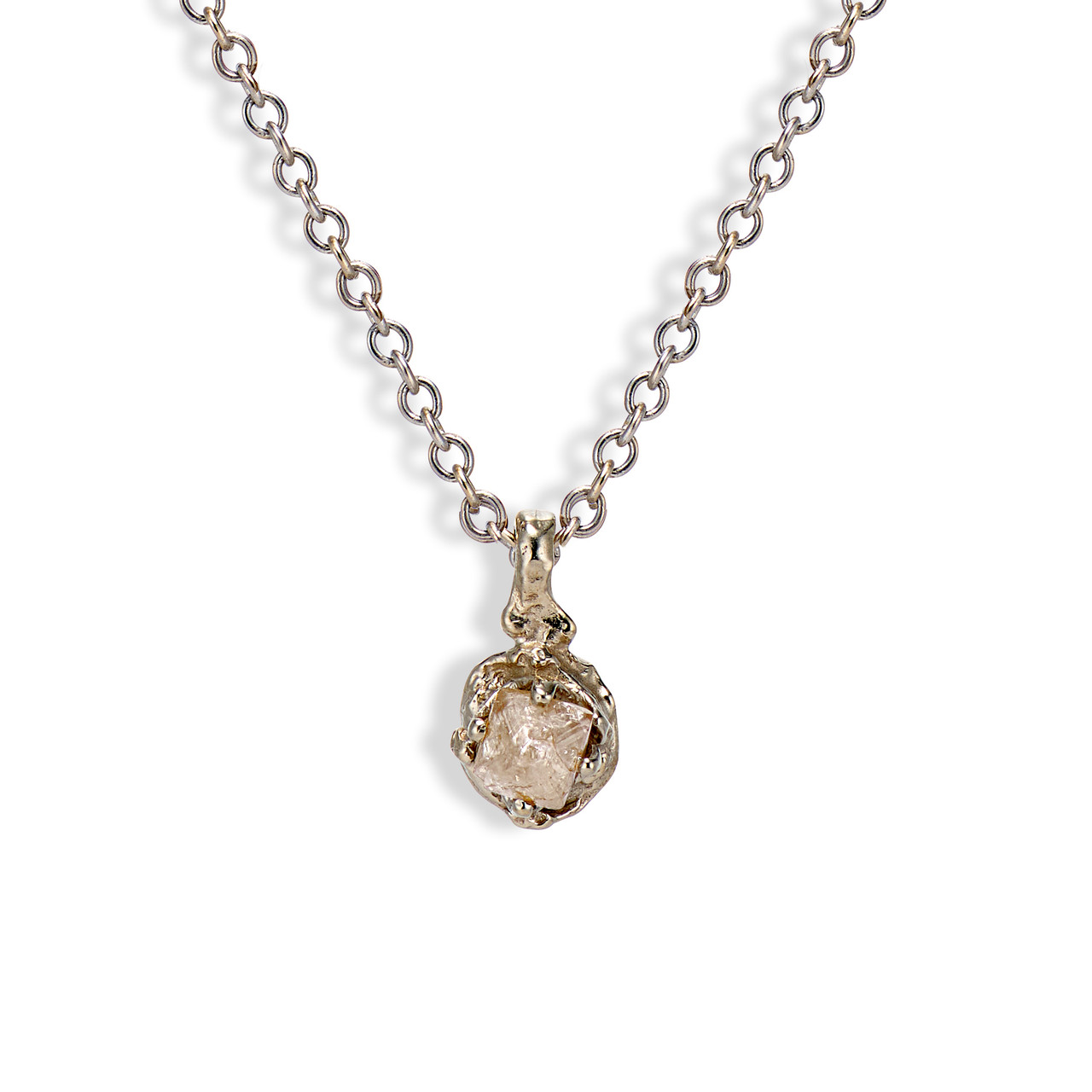 After the diamond is weighed the color is graded. Like cut and polished diamonds, rough diamonds are more highly graded when they are close to colorless. Ultimately, rough diamonds can come in all colors of the rainbow due to chemical impurities within the stone. For example, orange diamonds develop their rare orange hue due to nitrogen defects on the atomic level.

Other colors of rough diamonds and their chemical inclusions can include :

Certain colors of diamonds are additionally developed thanks to non-chemical inclusions such as the salt and pepper diamond mentioned above and pink diamonds where the color is created by a distortion in the crystal structure.

The GIA Institute, a nonprofit institute devoted to the research and study in the gemology field states that low saturation brown and yellow diamonds are considered within the normal color range of a rough diamond and are graded between ‘D’ (colorless) to ‘Z’ (light yellow) while high saturation yellow diamonds or colorful diamonds (like pink, blue, or orange) or considered fancy diamonds and fall under a separate grading scale.

Interestingly, some rough diamonds that would have been considered less valuable for their color are now highly prized, such as the salt and pepper diamond mentioned below.

For the most part, as a rough diamond is appreciated for its natural beauty the clarity of the diamond is not as important as other aspects, such as color, to the consumer. Some people feel that the flaws of a rough diamond add to its character and beauty and love the rough diamond, not despite its flaws, but because of them. 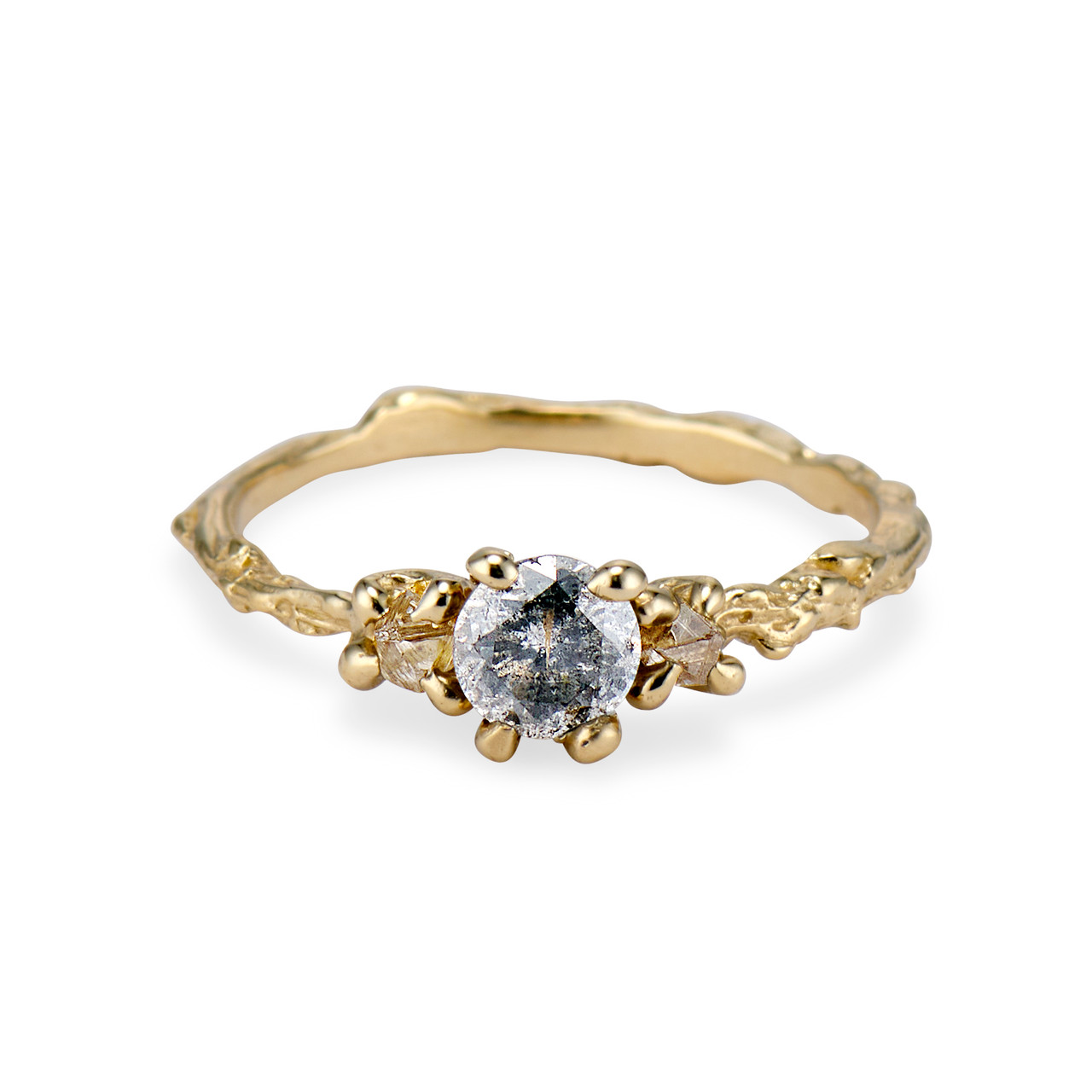 Yes, although rough diamonds are also known as uncut diamonds, they are still graded on cut like their cut diamond counterparts. Mostly.

Rough diamonds can be found in pretty much any shape as they are formed in a cubic system. However, there are three very common shapes of rough diamonds.

Diamonds that are eight-sided. This is the most common shape of a rough diamond is an octahedron. Diamonds are octahedron-shaped as a result of their atoms positioning themselves in the center with six lignans (or, atoms and neutral metals that have bonded to a central metal atom). An octahedron looks like two pyramids stacked from top to bottom. Octahedrons have eight faces, twelve edges, and six vertices.

When octahedrons are sawn in half to create multiple diamonds they are called, appropriately enough, sawn octahedrons. The resulting sawn octohedron resembles a pyramid with a flat bottom and pointed tip.

Diamonds that are twelve-sided. The second most common shape of a rough diamond. The dodecahedral rough diamond is commonly used in rough diamond jewelry thanks to its ability to be set easily within a band.

A cube is a rough diamond that is six-sided and resembles a box. Cube rough diamonds are a bit more rare than both octahedral and dodecahedral but are occasionally used in fine jewelry, particularly as an accent piece to the main gem.

When we think of fancy diamond necklaces and rings we think of polished, sparkling diamonds. In actuality, cut diamonds are a relatively new trend in the fine jewelry world.

The earliest diamonds were found naturally in rivers and were used as amulets or talismans of protection and good luck. The first recorded use by royalty is found in 322 BC and was reserved only for Kings as they stood for strength, courage, and invincibility. By the 1500s, diamonds were widely used as royal jewelry and mostly cut as table-cut stones which are flat on one side.

THE RISE OF THE SALT AND PEPPER DIAMOND 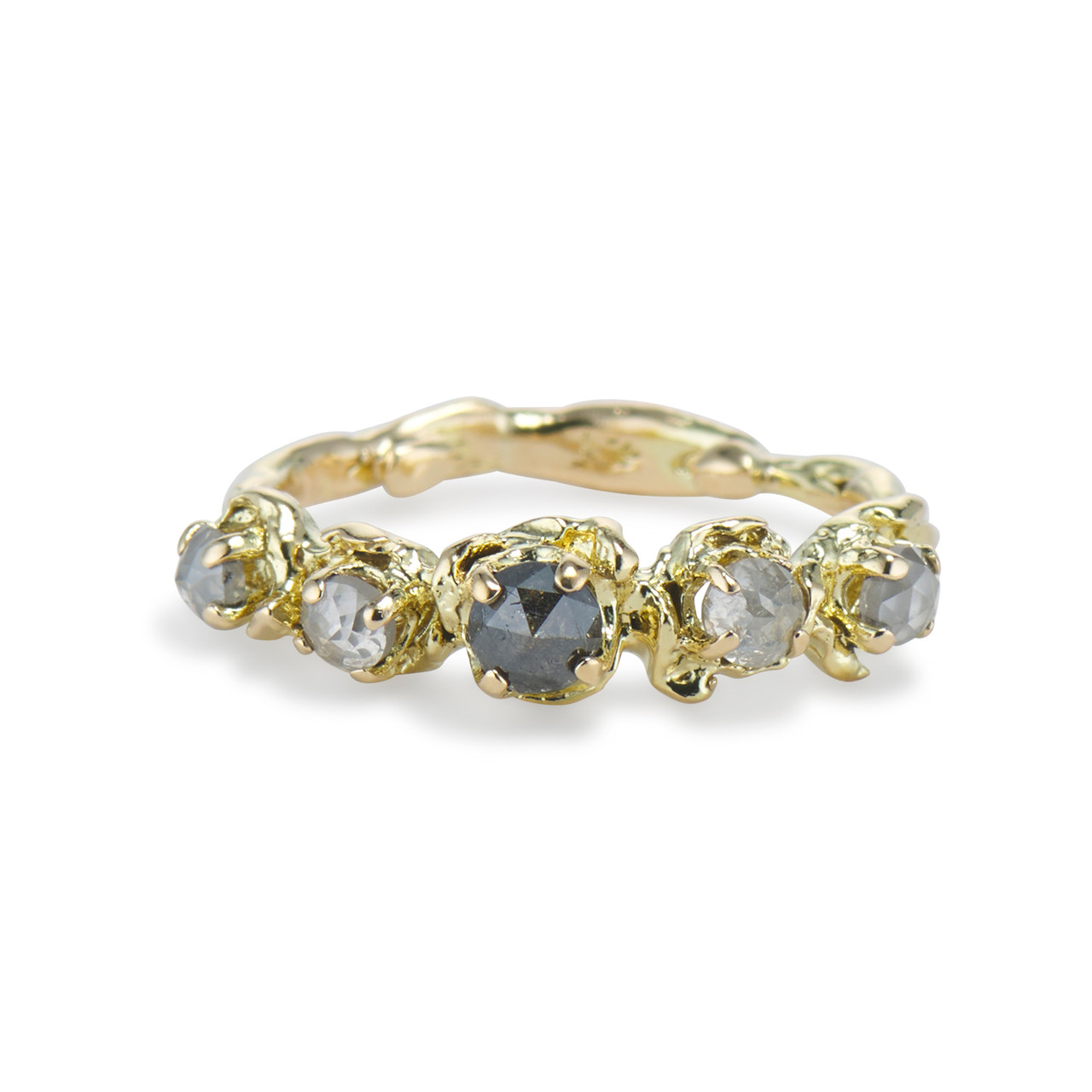 Salt and pepper diamonds are trending hard—and for good reason.

The Salt and Pepper Diamond is a natural diamond with white and black inclusions, adding depth and intrigue to the stone. Due to their unique look, salt-and-pepper diamonds are making a splash on the diamond scene—with people from all walks of life discovering just how beautiful these special stones truly are. 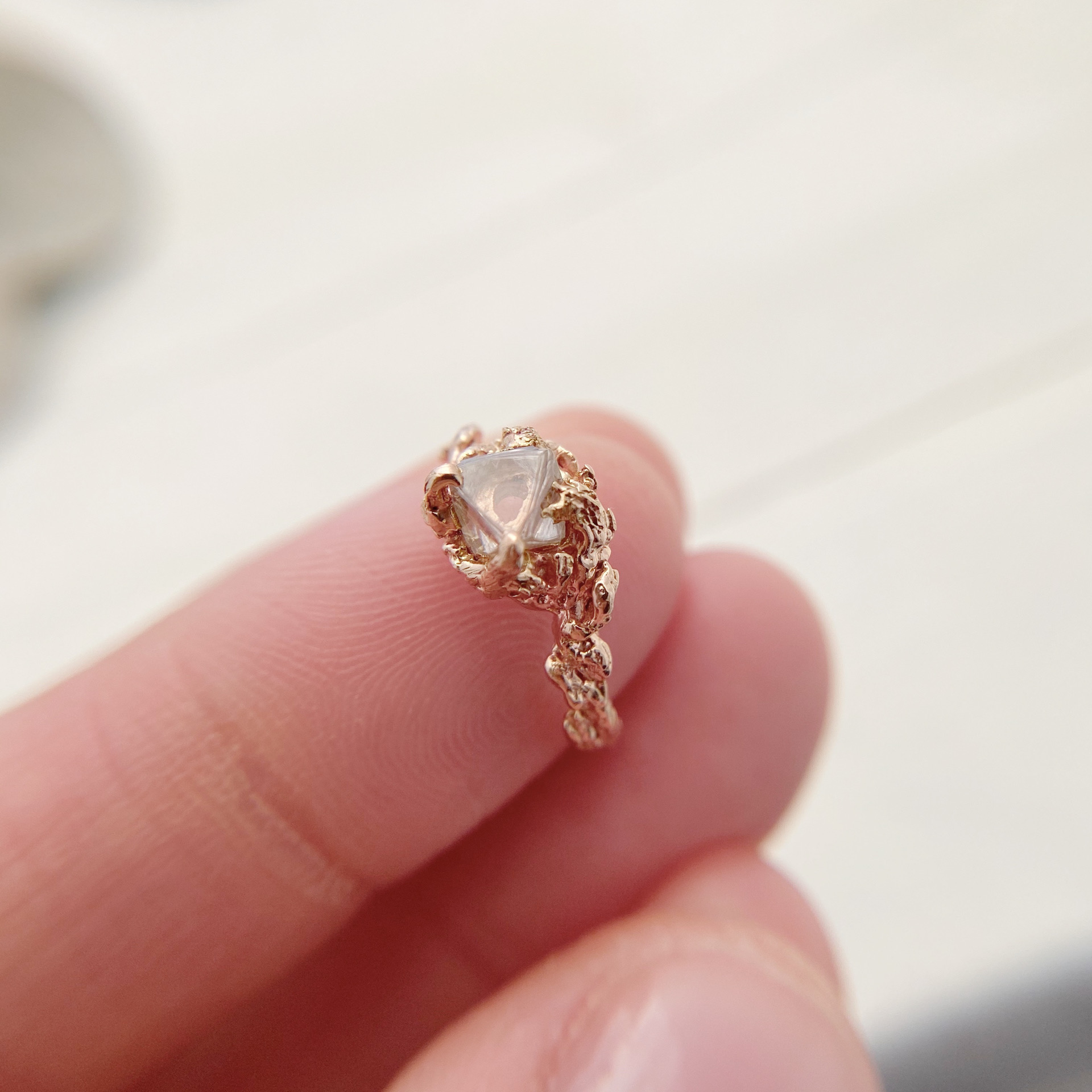 Whether you are looking for a rough diamond for your very own ‘diamond in the rough’ or simply interested in purchasing an uncut diamond that has been through as little processing as possible, rough diamonds are sure to delight and dazzle.